Check Out Tom Hanks Battling Pirates in The New Trailer for ‘Captain Phillips’!!! 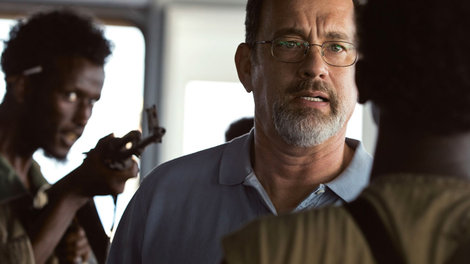 Here is a suspenseful trailer for ‘Captain Phillips‘, a movie starring Tom Hanks as the Captain of the US MV Maersk Alabama Naval Ship. Based on a true story, this giant shipped was attacked and boarded by Somali pirates. The film is directed by Paul Greengrass, who directed a couple of the Bourne movies. Catherine Keener, Max Martini, Yul Vazquez, Michael Chernus, Chris Mulkey, Corey Johnson, David Warshofsky, John Magaro and Angus MacInnes also star.

‘Captain Phillips’ will open the NYFF next month with a release date of October 11. Enjoy the trailer.

Official Synopsis: Captain Phillips is director Paul Greengrass’s multi-layered examination of the 2009 hijacking of the U.S. container ship Maersk Alabama by a crew of Somali pirates. It is – through Greengrass’s distinctive lens – simultaneously a pulse-pounding thriller and a complex portrait of the myriad effects of globalization. The film focuses on the relationship between the Alabama’s commanding officer, Captain Richard Phillips (two time Academy Award (R) winner Tom Hanks), and his Somali counterpart,Muse (Barkhad Abdi). Set on an incontrovertible collision course off the coast of Somalia, both men will find themselves paying the human toll for economic forces outside of their control. The film is directed by Academy Award (R) nominee Paul Greengrass, from a screenplay by Billy Ray based upon the book, A Captain’s Duty: Somali Pirates, Navy SEALs, and Dangerous Days at Sea, by Richard Phillips with Stephan Talty. The film is produced by Scott Rudin, Dana Brunetti, and Michael De Luca.

2 thoughts on “Check Out Tom Hanks Battling Pirates in The New Trailer for ‘Captain Phillips’!!!”