Hot off the set of ‘The Descendants‘ with Director Alexander Payne and writers Jim Rash and Nat Faxon, along with their Oscar win, both Rash and Faxon get into the director’s chair for the first time with their incredible summer flick ‘The Way Way Back‘. The comedy duo pull triple duty on this film, serving as directors, writers, and actors, which is no easy feat. But they pull it off with grace, fun, and great comedy. This little flick with an all-star cast is easily in my top five movies of the year so far.

If you’re wondering what ‘The Way Way Back‘ means, then wonder no more. For those of you born in the 70s and 80s, you might remember your parents owning a station wagon, and it refers to the far back rear-facing bench seat that all us kids fought over to ride in. I remember my dad had a silver and brown station wagon, and no matter if we drove two minutes away or two hours away, I always wanted to sit in the way way back. This little slice of life brings back great and nostalgic memories.

‘The Way Way Back‘ reminds a lot of the films ‘Adventureland‘ and ‘Little Miss Sunshine‘, as it takes place mostly at a water park in a small beach community during the middle of summer. We follow a young teen named Duncan (Liam James) who sets out to find himself and gain confidence to talk with people, girls, and become his own person. Duncan is stuck with his mother Pam (Toni Collette) and her new boyfriend Trent (Steve Carrell) with his teen daughter from a previous marriage Steph (Zoe Levin) on a summer-long trip to his beach house. 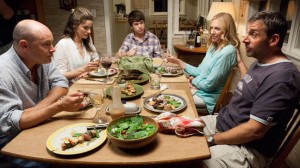 Trent constantly picks on Duncan for no apparent reason other than just to be mean, even telling him on a scale of 1-10, that he is a 2. Steph seems to take after her father and torments Duncan as well. Duncan soon finds a fun place at a water park called Water Wizz, which is owned by a fun guy named Owen (Sam Rockwell), who gives an award-worthy performance. Owen sees something in Duncan and decides to make his life better by offering a job at the water park to which Duncan happily accepts, although he tells nobody at home about his job.

While at the job, Owen teaches Owen how to gain confidence by ranting long and comedic monologues and even making inappropriate jokes at the expense of others. And Owen’s jokes seems to go over everyone’s heads as his clientele is clearly two decades younger than he is. Owen shows Duncan how to talk to women, such as Duncan’s crush Susanna (AnnaSophia Robb) who lives year-round with her over-the-top gossipy mom Betty (Allison Janney), who had me in stitches every time she was on screen. Her character in this reminded me of her character from ‘Drop Dead Gorgeous‘, but with more money. 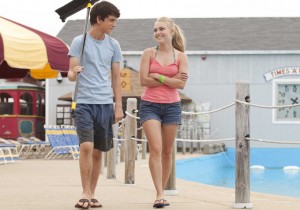 This is one of the better of coming-of-age films in a long time and I can’t wait to spend time with these characters again and again. The writing is perfect and the characters are amazing. Nothing is ever out of place in this film, and the pacing is spot-on. There is an even blend of gut-busting comedy and dramatic situations that will pull you closer and closer towards these characters. It was finally amazing to see Steve Carrell drop his usual “nice guy” shtick and play a real slime-ball here. He was great in this role, even if you hate him constantly throughout the film. Rockwell shines here and definitely deserves and award for his performance, while Janney is a force of comedy to be reckoned with. Everyone else turns in solid performances with a few great cameos from Rob Corddry, Amanda Peet, and Maya Rudolph. Rash and Faxon hit a home-run with this little film that won’t soon be forgotten. See this movie as soon as possible.

PS – Check out my interview with Jim Rash and Nat Faxon by CLICKING HERE!!