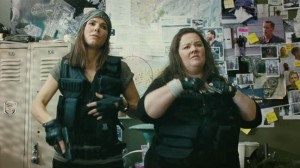 Director Paul Feig is on a roll these days. From his time spent on the hit show ‘Freaks and Geeks‘ and ‘Undeclared‘, to his big box office smash comedy ‘Bridesmaids‘, the comedic director has not missed a step with this laugh-out-loud action-comedy, ‘The Heat‘. Sandra Bullock’s anal-retentive and proper FBI character mixes very well with Melissa McCarthy’s rough and rowdy street cop character perfectly and packs enough laughs for two whole movies. With the quick-witted and vulgar dialogue, and the chemistry between these two outlandish characters, I found myself laughing from start to finish so much, that I had tears in my eyes. Much like ‘Bridesmaids‘, I expect this McCarthy/Feig team to score big at the box office again this weekend.

Sarah Ashburn (Bullock) is a hard-working and very successful FBI agent in New York who has a better track record than the rest of the agents, but is extremely lonely with no friends, due to her uptight personality. She is sent to Boston to stop a violent drug lord, in hopes that this case will land her the promotion she has wanted for a long time. Little does she know, that she will be forced to work with Shannon Mullins (McCarthy), who is looking for the same drug lord. 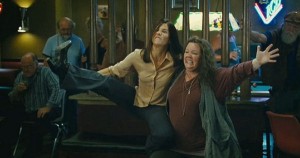 The complete opposite of Ashburn, Mullins is messy, dirty, seems to hate everyone, and uses the f-word so much, yet so brilliantly, it would make George Carlin blush. Mullins is not above throwing a watermelon at a black kid or yelling that her direct boss (Thomas F. Wilson) has no balls to the entire department. The two are paired up to solve this case of drugs and murder, as each woman struggles to change and be kind to one another.

If I can describe this duo, it would be ‘The Odd Couple’ mixed with ‘Bad Boys‘, and it sure does work on a comedic level, even it results are predictable. Much like how the film ‘Pineapple Express‘ mixed some violent action sequences with comedy, ‘The Heat‘ does the same thing here. We see bloody head shots, stabbings, and giant explosions done on a decent size budget. Some of the physical comedy, mainly with McCarthy is hilarious and very silly. She is a forced to be reckoned with, whether it be her chasing a subject on foot or hopping a fence, there is a Charlie Chaplin level of physical comedy there.

Both Bullock and McCarthy do an amazing job with their characters, providing not only the comedic aspects, but a few layers of loneliness, depression, and a troubled past. We feel for these characters and want to see more of them after the credits roll. Co-stars including Marlon Wayans, Demian Bechir, Jane Curtain, Michael Rapaport, and Dan Bakkedahl turn in good performances. Although, seeing Wayans as a straight-laced and unfunny FBI agent wasn’t to compelling, as I wanted him constantly to act goofy.

This is a much more vulgar film than ‘Bridesmaids‘ was, but also might be a bit funnier and has a better pace than the latter. This is undoubtedly one of the funniest films of the year with stellar performances from Bullock and McCarthy, as well as one funny script. I hope they make a sequel to ‘The Heat‘, because if they do, I’ll be first in line. This is the female version of ‘Bad Boys‘, and I’m okay with that.