Ang Lee’s vision of Yann Martel’s 2001 novel, ‘Life of Pi’ is one of the most visually beautiful films I have seen in a long time. If this film was made back when the book came out, which was over ten years ago, the movie would not have been as beautiful as it was today, due to the technology advancements we’ve had in just ten short years.  ’Life of Pi’ is one of the better 3D productions I have seen and if you choose to see this movie, see it in 3D.  ’Life of Pi’ will appeal to all audiences and you will find yourself falling in love with Pi and a majestic Bengal tiger, even if ’Life of Pi’ is good for only one or two viewings.

The first act of ‘Life of Pi’ follows a family in Southern India known as the Patels.  The youngest of this family of five is Pi Patel, whose dad owns a zoo and is part of a warm loving family.  Pi goes through grade school mostly ridiculed by his name where the kids call him Piss, but when Pi actually writes out the numerical Pi across several blackboards, Pi gains an ounce of respect, but not much in school.  We see Pi wonder about many things in life, as he takes an active role in asking all the major questions growing up questioning life and death and good and evil.

By the age of 12, Pi has taken on three different religions, Hinduism, Christianity, and Islam.  Even his family ridicule him about him following three religions at the same time saying that if he adds one more religion, he will have every day off of work for the rest of his life.  We even see Pi grown into a teenager and fins his first love, but as those hard economic times rush in, Pi’s dad decides to move the family to Canada and sell the animals in hopes of starting a new business.

The current dire situation and nature take it’s almost immediate toll, and there are only two left on the boat, Pi and the tiger who goes by the name of Richard Parker.  Pi and Richard Parker at stranded at sea for almost 8 months.  In that time, Pi learns to attain food for himself and Richard Parker, and all the while keeping a safe distance from this large cat. They also get a glimpse of the wold life at sea, witnessing a horde of flying fish, a giant whale, millions of glowing jellyfish, a mysterious island, and a second ferocious storm that might be just too much for Richard Parker and Pi.

As we find out in the first scene of the film as well as the last scene in the film, this amazing adventure story is being told to us by and middle aged Pi, who is sharing his story with a writer, who questions his story.  The adult Pi goes into explicit detail, spelling things out for this writer on what actually happened, and letting him decide for himself what he wants to believe.

Ang Lee did a phenomenal job of making this epic tall tale seem very realistic.  The use of real animals and special effects are astounding.  The film was made to be seen on the big screen.  The visual FX team tuned this creature to such a fine detail, that you won’t think for a minute that this Tiger was fake.  The other amazing thing about this film is Suraj Sharma, the teenage version of Pi, who is through most of the film.  This is Sharma’s first role, and man was it impressive.  He hit all the right emotional notes in the film, and you really care for him early on.

All this being said, this is a fairly heavy and epic film.  A film that is very beautiful on every level with a great cast that impresses.  But, I found myself not wanting to revisit this film.  Sure I want to see how it looks on blu-ray, but to me, this does not have a replay factor whatsoever.  May it be the subject matter, or the huge reveals that you can’t forget, and will hinder your future viewing experiences.  But, rest assured, this is a fantastic film and should be seen on the big screen at least once. 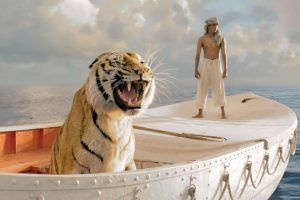 ‘Life of Pi’ comes with one of the best 1080p HD transfers of the year and is presented in 1.85:1 aspect ratio. The detail is very sharp in all of the live-action sequences.  Some of the heavier CG effect shots tend to go a bit soft, but isn’t too noticeable to the untrained eye. Closeups provide fine detail as you can see wrinkles, scars, and individual hair folicles nicely. The hairs on the animals also look amazing.  The background shots provide a lot of  depth here too, giving a very natural look. You also might notice a tiny bit of noise during the much darker scenes as well, however the rest of the video is completely free of any other compression issues or any dirt. The colors pop right off the screen and has a lot of earthy tones to it with tons of yellows, browns, and greens.  The blues sparkle right of the monitor. Flesh tones are natural and smooth with the black levels running deep and inky. The 3D version of this film is one of the best out there. From the flying fish to the meerkats, everything has so much depth that you will feel like you are on that lifeboat with Pi. There are quite a few “pop out” effects, which successfully work each time, and don’t seem to gimmicky. Amazing video presentation.

This release comes with an impressive lossless DTS-HD 7.1 audio mix and is completely satisfying. It’s on par with the biggest of action films, however I wouldn’t classify this as an action movie, although it has a few action scenes in it. Dialogue is always crystal clear and easy to understand with no evidence of cracks or hissing. What really shines in this audio presentation is the amazing sound effects. From the epic storms, to all the wildlife and the tiger’s roars, it was one of the most immersive sound mixes I have ever heard. The directionality was perfect as I could hear the sounds of fish and people talking coming from one direction and moving in closer. This might sound weird, but even the wind sounded great. The score was perfect and added a lot of emotion and suspense to each scene. The ambient noises of nature make full use of the surrounds and rears for a full robust sound. And the bass kicks into high gear during the heavier action sequences. Amazing audio presentation here. 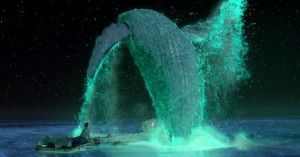 ‘Life of pi’ is a fantastic movie and is one of the best looking films in a long time. Ang Lee deserved the oscar for Best Director for it. It’s always fun to watch this with new viewers to get their take on it and what they feel afterwards. The video and audio presentations are top notch and might even be demo worthy. The extras are incredible as well. This amazing film and blu-ray is highly recommended and I don’t say this often, but the 3D version is the one to get.