Jackie Chan’s Next Film Will Be ‘Skiptrace’!! 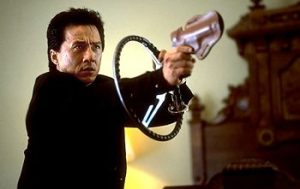 This sounds a little bit too familiar. Jackie Chan is set to star with Fan Bingbing in ‘Skiptrace‘, which will be directed by Sam Fell. Chan has been out of the comedy/action spotlight for a little while now and some might welcome his return into the genre. This project is based off an idea of Chan, which is funny, because it sounds exactly like three of his previous films.

First off, Bingbing is a Chinese actress who was in last year’s amazing Korean war film ‘My Way‘ and is in ‘Iron Man 3‘ and the upcoming ‘X-Men‘ film. And director Sam Fell is known for directing CG animated films such as ‘ParaNorman‘ and ‘Flushed Away‘. This will be his first big effort into live-action. But the film’s premise made me chuckle, knowing what films Chan has been in and it coming from his mind.

The premise will follow a Hong Kong detective (Chan) who takes on the case in tracking down a smooth talking and foul mouthed American gambler on the run from his loan sharks. The two form an unorthodox partnership and attempt to dismantle Hong Kong’s huge crime lords, while they adventure through some of China’s most exotic locations. Doesn’t that sound familiar? Or even a blatant rip-off from ‘Rush Hour‘?

I guess Tucker doesn’t want to make another one, so Chan is doing a “spin-off”.  Oh please, cast Chris Tucker in this please. It would come full circle.