I’m not quite sure why ‘The Hangover III‘ was called ‘The Hangover III’. The first two films actually dealt with four friends having an epic hangover and their crazy exploits and adventures. This third installment doesn’t even include a hangover and oddly leaves a lot of the comedy at the front door and focuses instead on violence, murdering animals, and action sequences. I’m sure this will score a giant box office reward for its opening weekend, but bad word of mouth should prevent this third and final act from making any more money past the next couple of days.

The first film was a fun, nutty comedy that garnered gut busting laughs from start to finish with its witty dialogue and entertaining characters that seemed to get themselves into some off-the-wall situations. Then part two was released and was virtually the same film as part one, but in a different setting. Despite the many similarities, part 2 did offer some genuine funny moments form time to time on a grander scale. However, this third one is the bottom of the barrel. Instead of making a raunchy comedy with some action beats, director Todd Phillips decided to make a deplorable action-crime film with beats of comedy, that almost never works.

In the first few minutes of the film, we see a prison riot with the escape of Leslie Chow (Ken Jeong), and two deaths. One of which is an adult giraffe that Alan (Zach Galafianakis) purchased for reasons unknown as he is driving with the animal in a trailer behind his car. The poor giraffe is dodging a few highway bridges until one is too low to dodge. The giraffe is decapitated into a bloody mess that causes a giant highway pileup behind him. It’s as if this third go-around is trying desperately to push the bounds into more depravity. And no, this isn’t the only act of killing animals. You can add drugging and neck breaking a few dogs and smothering a rooster with a pillow to name a couple of other instances. 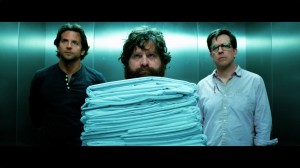 From Alan’s behavior and actions, it’s clear that he needs some intense help. With the assistance of his family and the Wolfpack, they all decide to stage an intervention and take Alan to a nice rehab facility in Arizona. To sweeten the deal, Phil (Bradley Cooper), Stu (Ed Helms), and Doug (Justin Bartha) agree to drive Alan together to the facility. The guys don’t get but only a couple of hundred miles before they are run off the road, kidnapped, and tied up by a ruthless mobster named Marshall (John Goodman).

Marshall had over $40 million in gold bars stolen from him by Mr. Chow a few years ago, but can’t seem to locate his whereabouts. But Alan has kept in touch with Mr. Chow often over the years to Marshall’s knowledge and therefore kidnaps Doug and forces the other three to locate Mr.Chow and his gold. Thus are third adventure begins that takes the three best friends that anyone can have to jail in Tijuana, a basement in Mexico, and ultimately back to  Caesar’s Palace in Las Vegas, where this whole franchise began.

One of the only likable scenes in the film was when Alan meets the female version of himself (Melissa McCarthy) who runs a Pawn Shop in Vegas. Their banter, body language, and love-at-first-sight is engagingly awkward, yet sweet. It’s definitely one of the highlights of the entire film. The rest of the 100 minute run-time, the entire cast seems to be bored and phoning it in. Cooper is still fun to watch take charge of the situation and is witty enough to receive a pass. Galafianakis takes in a meatier role here with his usual quirky characteristics that seem to come across more rude then funny. Jeong’s Chow is much less funnier here and more aggressive and murderous. Poor Bartha only receives a few minutes of screen time again here, where Helms’ Stu seems to be off camera a lot and is not as animated as he was in the first two. We even get to see some of the minor character return from the previous two films for a few minutes, but no instance was fulfilling.

If this is the final chapter of the Wolfpack, then this is a sad and unfortunate way to go out. It should’ve been with a bang, but it went with a whimper and slap in the face. The filming, dialogue, and characters here felt one-note and very vague throughout. The only good thing to come out of ‘The Hangover III‘ was the two minutes during the end credit sequence that showcased a familiar scenario and was met with giant laughs and a possible 4th film.