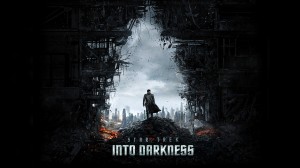 I must admit that when I walked into the the crowded theater yesterday to watch J.J. Abrams’ second journey into the Star Trek universe, I was a bit apprehensive and weary on how good it could be. Reason being, that there were no press screenings before the film was released. On the contrary, the actual press screening was one hour later than the regular screening for anyone to attend who bought tickets. Usually studios do this, because they know they have a terrible film on their hands and do not want negative reviews about their movie until the film is out. I thought of two reasons why Abrams woud do this. Either he really did have a crappy film on his hands or in true Abrams fashion, he kept tons of secrets and reveals throughout the picture wanted to keep all a secret until it was released.

Now, I’m going avoid specific spoilers at all costs for you, but will talk more or less in generalities. But first and foremost, I loved ‘Star Trek Into Darkness‘. Abrams has conjured an action packed thrill ride of a sequel with just enough heart and soul that should appease new fans of the franchise as well as the old school Trekkies. I have no doubt that this will be one of the most successful films of the year and will not be surprised if they announce a third film in the next few weeks for either Abrams or another A-List director to helm. 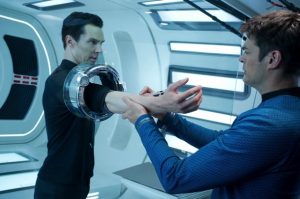 ‘Star Trek Into Darkness‘ still takes place in Abrams alternate time traveling universe as we witnessed in his first film, but he still links the two up perfectly here as well. One of the things I love most about this sequel is that it’s a story of Kirk and Spock and how their friendship evolves. In this reboot of the franchise, we haven’t seen Spock and Kirk become the friends that we know them to be from the originals. Kirk is still young, cocky, brave, and pulling alien poon into every port he rolls into, and Spock is still struggling with his half Vulcan side and half human side. And these two officers of Star Fleet do not mix.

Things start out with a bang as Kirk, Dr. McCoy, and Spock are on a foreign planet are on a primitive alien planet with a very large volcano that is about to annihilate the entire landscape along with its inhabitants. With this intense situation, we see the rogue and unwilling to follow the rules Kirk do what he does best and Spock use logic instead of emotion to accomplish the same task. From here, we see their relationship is and what it could be. Back on Earth, Kirk is relieved of his Captain duties due to his insubordination and is replaced by Commander Pike, to which he makes Kirk a first officer.

Meanwhile, a terrorist-like mega explosion destroys a bunch of buildings and people on Earth. At a ‘StarFleet’ meeting led by Admiral Marcus (Peter ‘Robocop’ Weller), it is known that a man by the name of John Harrison (Benedict Cumberbatch) is behind the explosion and has escaped to a far off ‘supposedly’ uninhabitable Klingon planet, where the Enterprise heads to capture Harrison. But there is much more to this story and Harrison than meets the eye. 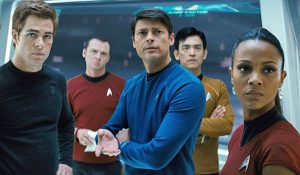 Abrams seemed to have focused more on Spock and Kirk this time around than any other character. And while we have some good moments with the other characters, they seem to not have much screen time and serve for some comic relief, which is done flawlessly with great references to the original films and tv show. There are many to spot out here. And if you thought that the first film had a ton of action sequences and spectacular effects of the in-flight Enterprise, than you are in a for a treat with this sequel as Abrams turns up the action to eleven. There are plenty of sweat inducing scenes that will keep you on the edge of the seat throughout its two hour and 13 minute run-time.

We get to see a scene similar to the first film where Kirk space jumped onto the Vulcan planet onto that tiny drill. Well this time around the stakes are higher and the target is much smaller. Normally, with similar scenes in sequels like this, I don’t like, but here it works and is very exhilerating. And all of the new gadgets and ships are amazing to look at. If this is any pre-cursor to Abrams making ‘Star Wars’, then I’m 110% on board. The way he films outer space and these large space ships is incredible. I cannot wait to see a Star Destroyer or the Falcon in action. It’s as almost like its a ballet of ships at war.

Cumberbatch really shines here. His work on ‘Sherlock’ is amazing, but this is some next level work here. You never know quite what to think about him and he is truly a force to be reckoned with. Even though he is roughly the same size as everyone else in the film, he just appears and larger-than life aspect to him. It’s very terrifying. Quinto and Pine turn in stellar performances as well. Maybe some of their best work to date as we see both men struggle with their flaws and their friendship. I believe that at the true core of this sequel, it is a love story. But a love story between two friends who are destined to do great things.

Simon Pegg as Scotty has his own separate mission in this film and is a key part of the movie. I love Pegg as Scotty and the amount of humor he brings to the table. It’s much needed and is always welcomed. Karl Urban never fails to impress as McCoy as the level headed doctor who is always angry at something. It was amazing to see him flirt with some of the staff of the ship. Anton Yelchin’s Checkov doesn’t get a lot of screen time here, but still has a powerful performance and has a great scene involving the Enterprise uniform. I do believe Sulu (John Cho) will have a bigger role in upcoming films as he demonstrated with his short on-air time that he is capable of leading a ship. And Zoe Saldana as Uhura serves more as a comic relief this time around as like Kirk is trying to have a relationship with Spock, which as we know, can be difficult. And of course Peter Weller puts it all on the table and is ruthless to a tee.

I saw the film in IMAX 3D. If you have the option to see this at the IMAX, by all means do so. It really is two steps above a normal theater for a movie like this. I literally felt like I was on the bridge of the Enterprise for the whole film. The sound is incredible. The 3D however is take it or leave it. I didn’t find it to be good or bad, just average. I would have much preferred to see the film in 2D. There were some ghosting in a few shots and the picture was darker because of it.

I cannot wait until we have Star Trek films where we have the Enterprise do what it is meant to do, which is go out into the beyond and explore new planets and life forms and go where nobody has gone before. This isn’t that movie, but I expect by the next one, we will be. ‘Star Trek Into Darkness’ has tons of twist and turns and his on the highest level of entertainment. This is a remarkable sequel to the first film and I can’t wait to see it again. This might be the most fun I will have at the theater all year.