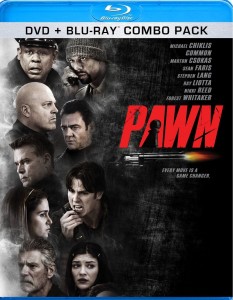 I had a lot of fun with ‘Pawn’. This is one of those instances where you are perusing movies online or at your local video rental place where you come across a film you’ve never heard of, but see tons of A-list actors on the front cover. And when we decide to purchase or rent based only on the cover, we usually have a 50/50 shot of really enjoying the flick. Most of the time, these particular films have a low budget and suffer from a wide range of problems. Sometimes the budget is too small to create a decent story and locations, and other times it’s bad filming. With ‘Pawn’, everything tends to work here and is a fun film that deserved a bigger audience.

This whole movie basically takes place in one location, which is a diner during the evening hours. Three men sporting weapons enter the establishment intent on robbing the joint. The leader of the trio is referred to as ‘The Brit’ (Michael Chiklis from ‘The Shield’) and tells the owner (Stephen Lang, the bad guy from ‘Avatar’) to open up the safe and empty the loot. However, once the safe is opened, there is nothing in there but documents and coins. ‘The Brit’ has done his homework and tells the owner to open the other  ‘real’ safe.

This proves to be not part of the plan as the other safe is on a timer and will not be opened until midnight. Well since the trio of criminals bought the ticket, they decide to take the ride and wait in the diner until midnight to get their big score. Besides the diner having patrons still eating and scared for their lives, everything seems to be kosher for the moment.  That is until a cop (Forest Whitaker) enters the establishment for food, and quickly realizes things are not on the up-and-up.

Meanwhile, when the baddies first entered the diner, there was guy in the bathroom by the name of Nick (Sean Faris), who is a recently released small time crook who is chosen to be the liason between the robbers demands and the police negotiator who is arrived on the scene, played by Common. From here, we slowly find clues as to why the robbery is taking place and the motives behind everyone, which leads up to a blood soaked climax with plenty of twists and turns.

‘Pawn’ does a great job in not trying to be just another run-of-the-mill hostage negotiator film like we have seen many times before. It might not have the high octane action that ‘Die Hard’ does, but each scene in ‘Pawn’ is highly suspenseful, enough for you to break a sweat. There is enough decent dialogue with some physical altercations to keep the pace running full force. The twists and turns come often as we slowly find out who is actually behind the robbery. Sure, some of the story is formulaic, but the actors turn in great performances and the story is complex enough to keep you guessing.

Director David A. Armstrong does a great job in his one location film and keeps the flow working with different angles and fun camera movements to keep us interested. Keep an eye out for Ray Liotta here as well, as he is always great in everything he has done recently. ‘Pawn’ is definitely a movie you want to own and will keep you on your feet throughout the entire picture. Highly recommended. 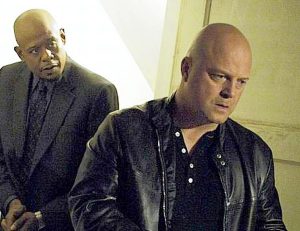 ‘Pawn’ comes with a great 1080p HD transfer and is presented in 2.40:1 aspect ratio. The entire film was shot digitally and looks very clear, clean, and glossy.  The colors look great in the diner and seem to pop. In the evening exteriors, the street lamps light up the dark streets nicely. The black levels run deep and inky here as well. The detail is crisp and never comes across on the soft side. Closeups of facial hair and stitching on the clothes look very good. Even some of the ambient nicks and dirt in the diner look very crisp. There was no evidence of any artifacts, banding or motion blur, making this Anchor Bay release a solid presentation in the image department.

This release comes with a lossless Dolby TrueHD 5.1 audio mix and it sounds very good, considering it is mostly a dialogue driven film. Speaking of the dialogue, it’s always crystal clear and always easy to understand. The ambient noises sound very good on the rears and are used often. The sound effects of police sirens, radios, and telephones all have great directionality and use the full speaker system very well. The score sounds amazing. It’s loud and packs a punch when it needs to without over staying its welcome. It never drowns out any of the dialogue or the sound effects either. I doubt you will use this audio track as a demo for friends, but it definitely gets the job done and had no evidence of cracks or hissing anywhere.

‘Pawn’: Behind The Scenes (HD, 23 mins.) – Here is a decent behind the scenes extra that covers the major story arcs of the film and the characters. The script is also talked about as well as the filmmaking itself and Chiklis serving as producer.

I really enjoyed ‘Pawn’. I was surprised how good it was, considering it was a film I never heard of. The pacing is spot on with the right amount of plot twists and action beats. The stellar cast turns in solid performances too. The video and audio look great, however I wish there were more extras to this or interviews, given the amount of talent on the film. I can’t wait to show my friend’s this movie and see if they can figure out the twists and turns before the end. If the price is right, definitely pick this up.