‘American Psycho’ Is Slicing Its Way to the Stage as a Musical!! 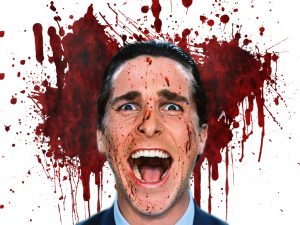 Break out your business cards and Huey Lewis albums, because everyone’s favorite CEO and serial killer is back. This time on stage in a musical. This coming December at the Almeida Theatre in London, Patrick Bateman will wreak havoc once again onstage in ‘American Psycho‘ the musical. Based on one of the greatest novels of all time by Bret Easton Ellis, this adaptation of ‘American Psycho‘ was written by Roberto Aguirre-Sacasa, composed by Duncan Sheik, and directed by Rupert Goold, who are all A-List talent in their fields.

The creative forces behind this project have put up a KICKSTARTER campaign to enhance the show. Yes, the show seems to be finished for the most part, but this money they collect will be put towards making the show even greater. They even have Ellis himself behind this project. They have a goal of $150,000 with 18 days left on the clock. There are a ton of cool gifts you can get when donating. I hope this comes stateside, because I would just kill to see this musical. And if it is not too much to ask – – Hey Bret, when will you return to the books for sequels to ‘American Psycho‘ and ‘Rules of Attraction‘?

Every dollar we raise here will go directly toward enhancing our show. For instance, we want to increase our rehearsal time by two full weeks. We’d love to use a live band instead of pre-recorded sound. Even the wardrobe costs are high – what can I say, Patrick Bateman and his Pierce and Pierce colleagues only wear designer labels!

Seriously, every single contribution (no matter the size) will make a tangible difference to our production. We hugely appreciate your support.

AMERICAN PSYCHO paints the shocking, funny and unsettling portrait of Patrick Bateman, a 26-year-old Manhattan investment banker with a designer lifestyle and a twisted mind. The novel was originally published in 1991 and has remained a part of contemporary pop-culture ever since. In 2000, Lionsgate released the celebrated film version directed by Mary Harron and featuring Christian Bale in his star-turning performance.

A stage musical gives us the unique opportunity, through song, to go even deeper into the characters’ psychologies than ever before. And what better character to investigate than one of modern literature’s greatest and most enigmatic anti-heroes — who also happens to be an avowedly passionate music-lover?

Our show remains faithful to Bret Easton Ellis’ world and his satirical treatment of the materialism and greed in this era of late capitalism. Roberto, Duncan and Rupert traveled back to Patrick Bateman’s New York City of synth-pop, haute cuisine, and killer style; they returned with a musical’s worth of ’80s-tinged tunes to reinvent AMERICAN PSYCHO in this thrilling new medium.

The Almeida Theatre and Headlong are two of the UK’s most impressive non-profit theatre companies. They make extraordinary work and keep it universally accessible through funding from public agency Arts Council England, charitable grants and the generosity of individual and corporate donors.

They are the ideal partners for us on AMERICAN PSYCHO, with the artistic expertise and theatrical track record to be able to fully realize the vision and ambition of our creative team in the exclusive intimacy of the Almeida’s 325 seat auditorium.

The budget for a new musical production of this scale is significant. As the commercial production company, we at Act 4 Entertainment are responsible for pulling together the extra funds to enable everything to take place at an enhanced scale, from extending rehearsals from the traditional five to seven weeks, to having a live band instead of pre-recorded sound.

So we’re asking YOU, the fans of AMERICAN PSYCHO, to participate in making this production a huge success.

We hope as many of you as possible will be able to see the World Premiere in London this December. Meanwhile, here are some awesome rewards to kick things off: original music from the show, exclusive T-shirts, limited-edition artwork, Patrick Bateman’s “business card” and even a personalized and signed copy of the novel AMERICAN PSYCHO by Bret Easton Ellis himself.