The Ultimate Preview For ‘Wrestlemania 29’!!! 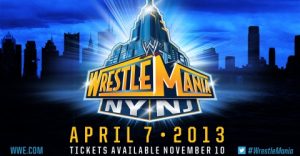 The most exciting event in American television is coming up this Sunday, and I’m a little concerned that some of you are going to make the wrong choice. Sure, Season 6 of “Mad Men” premieres, but that’s not the right call. The correct choice is to pony up and order Wrestlemania 29 on pay-per-view. Unfortunately, I’ve hit a lot of dead ends trying to spark Wrestlemania conversations. So I’ve compiled this helpful list, breaking down the featured matches at the Showcase of the Immortals by the television show you should forego watching in order to truly soak in the Show of Shows. 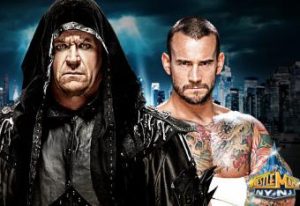 Your favorite match if you like: Mad Men (particularly Don Draper)

Things are going to end poorly for both Punk and Don, but they sure are making it interesting. If any television character has ever needed to get his comeuppance, it’s still Don Draper but CM Punk is a close second.

CM Punk has taken the Old Tyme Wrestling Heel character to new heights over the past eight months, most recently leveraging the actual death of the Undertaker’s longtime manager Paul Bearer (get it?) to get under the Undertaker’s skin. He’s gone far enough past the boundaries of good taste that it’s fair to question whether the man playing the Undertaker character should legitimately hurt him at Wrestlemania. How far past? He poured Paul Bearer’s ashes from the Undertaker’s mysterious urn onto ‘Taker’s beaten body on Monday night. And that’s probably third on the list of uncomfortable CM Punk-Undertaker moments this month.

The Undertaker’s matches at Wrestlemania have a sense of inevitability to them because he’s 20-0 at Wrestlemania and there’s no chance in hell that the Streak is ending. CM Punk has flipped the narrative and turned the question into “how much is this guy going to get away with before he goes down in flames?” Great stuff and easily the most compelling match on the card.

Your favorite match if you like: The Walking Dead

You may recall that we already saw this match at Summerslam. The premise: Brock Lesnar has broken John Cena’s arm, HHH’s arm (twice), Shawn Michaels’ arm and Vince McMahon’s hip in a year long reign of terror. HHH is putting his own career on the line to get vengeance on Brock in a No Holds Barred match.

If you’re OK with putting aside questions like “How do they keep that Hyundai so clean?”, “When did this ragtag group become military strategists?” and “Why did she make that kid shoot his own mom?!?”, then you’ll likely be OK putting aside the issue of how absurd it is that the heir to the WWE empire is putting his career on the line against a guy that he signed to perform at the event. And man, this is going to be violent!

Best way to spice up a bland character? Xenophobia! Jack Swagger floundered as “The All-American American” because the entirety of his character was that he was blond and is from Oklahoma. He took some time off and returned as “The Real American” with a new mouthpiece named Zeb Coulter.

Zeb’s worldview is an amalgam of every crazy chain e-mail your grandparents have ever sent you. He has a problem with people who aren’t “Real Americans”, namely Mexicans. His rants even upset Glenn Beck, who felt that WWE was making a villain out of the majority of its audience by using an over-the-top character to make irresponsible political arguments for entertainment purposes. So there’s that.

So Swagger earns a World Heavyweight Championship match, and guess who the champion is? Mexico’s own Alberto Del Rio! It’s like this is scripted. To be honest, I want to see more of Zeb Coulter if only to see how he manages to eventually get himself fired. This storyline doesn’t match the Sgt. Slaughter Iraqi sympathizer storyline from Wrestlemania VII, but I appreciate the effort. 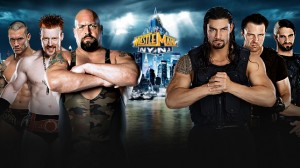 Randy Orton, Sheamus and The Big Show v. The Shield

Your favorite match if you like: Parks and Recreation

If you like your characters smart and thoughtful, then you’ll love the Shield.  They’re the Pawnee Parks Department of professional wrestling. I’m not sure what they’re doing with the flak jackets but otherwise they’re the most promising performers on the roster. The idea behind the Shield is that these guys are professional wrestlers as professional wrestlers are supposed to be. In their view, the cartoonish characters WWE has been promoting are perpetrating injustices on the wrestling audience by (and I’m extrapolating) removing realism from the product and making it difficult for the audience to engage with what’s happening in front of them. If you care about wrestling, it’s important that the Shield win on Sunday. 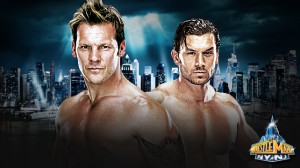 Your favorite match if you like: Mike and Molly

‘Fuck is wrong with you. Make better choices. 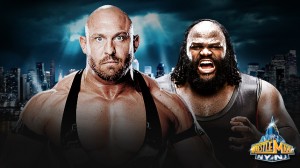 Your favorite match if you like: The Big Bang Theory

If you like your characters predictable and one-dimensional, then you’ll love Ryback. A cross between Goldberg and WCW’s Renegade, Ryback is essentially all the nerds you hate from “The Big Bang Theory” rolled into one, if they all decided to ‘roid up.

Our only hope here is Mark Henry, who has fantastic theme music and inducts his opponents into the Hall of Pain while yelling things like “Somebody’s gonna get their wig split.” I don’t know what that means, but I always enjoy it. 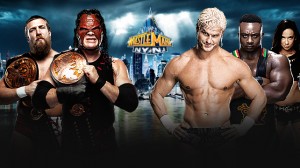 Your favorite match if you like: Mad Men (specifically Peggy Olson)

My good friend Dolph Ziggler has had the best year of any WWE Superstar this side of CM Punk. But here he is, overworked and underappreciated in a tag-team title match with a guy who’s never wrestled before (and only got this position because of his look). If he decided to pack his things and take a position at another advertising firm I’d understand his decision, even if the goodbye would be painful. 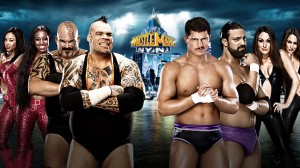 You really need to be in the right frame of mind to get behind the Funk-a-Saurus. It’s not quite wizards rapping, but it’s unusual. With that said, this will be fun and short. 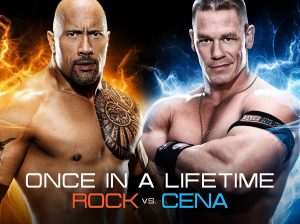 Your favorite match if you like: Game of Thrones

You know how George RR Martin is in poor health and his fans are terrified that he might die before finishing the series? That’s generally how I’ve felt watching The Rock and John Cena feud at a glacial pace for the past three years. It’s pretty clear that The Rock signed on for a (very) limited number of appearances but I hoped that we would see him feud with a variety of WWE Superstars before heading back to Hollywood to save movie franchises. Instead we’ve seen a remarkably drawn out feud with Cena that is stretching into its third Wrestlemania. There’s a genuine fear that The Rock is not going to deliver on the promise he made back in the spring of 2011.

But he’s still The Rock, and he’s still the most talented performer WWE has ever had. It helps that this year’s match has some semblance of a realistic premise: that Cena’s loss to The Rock last year consumed him personally and professionally and that redemption at Wrestlemania is the only way he can continue his career. This match will build on the template of Wrestlemania VI (Hogan-Warrior) and Wrestlemania XVII (Rock-Austin), and both of those turned out well.

2 thoughts on “The Ultimate Preview For ‘Wrestlemania 29’!!!”