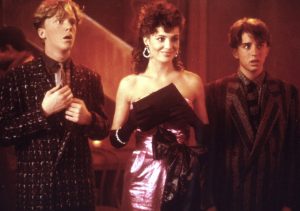 John Hughes would not be happy about this. Universal Pictures and Silver Pictures are set to remake ‘Weird Science’, the 1985 iconic film that was the superlative tale of nerds who had their ultimate wish come true. Joel Silver will produce the film as he produced the original with Hughes back in the 80s. Michael Bacall will pen the screenplay for the remake. Bacall wrote the remake of ‘21 Jump Street’ (which was another 80s remake) and the party film ‘Project X’.

Why would anyone want to tamper with a John Hughes film? Sure you can take on ‘Curly Sue‘, but definitely not ‘Weird Science‘. For that matter, I can’t even fathom a remake of ‘Sixteen Candles‘, ‘The Breakfast Club‘, or ‘Ferris Bueller’s Day Off‘. I imagine a lot of folks are not going to be too happy about this.

It’s going to be fairly impossible to recreate this film and cast for this. I can see Michael Cera and possibly Jay Baruchel playing the two nerd characters. And maybe Scarlett Johansson or Natalie Portman playing the perfect woman here. But, knowing Hollywood, it will be way worse than that. I don’t have high hopes for this at the moment.

Hopefully something will good will come of this and Oingo Boingo will get back together.

One thought on “Hollywood is Remaking ‘Weird Science’!!”