Holy smokes, if you’re a horror fan, you need to see this film immediately.  Most of us are familiar with the Sam Raimi masterpiece, The Evil Dead.  The 2013 version is a remake, make no mistake about that, but it is one of the few remakes that actually holds ground with the original source material.

You know the story, teenagers in a cabin, find a book of the dead, demons possess, deadites show up, lots of blood, carnage, everything we love pretty much.  Well, where the 1981 film is often watched either lovingly by movie geeks, or jokingly by college kids playing drinking games, the 2013 version is sure to shock old fans of the series as well as newcomers.  The characters have changed, some of the plot details have been modified, but ultimately, this is the same Evil Dead we know.  Everyone was skeptical, especially with newcomer Fede Alvarez directing, but Producers Robert Tapert, Sam Raimi, and Bruce Campbell did right by putting their baby in this insane genius’s hands. 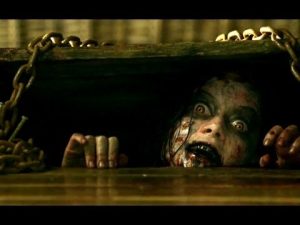 The source material is indeed a classic, but we can all agree that the blood and gore were over the top, and today are mostly comical.  Well, the blood and gore is still here in (literal) floods, but this time it is brutally painful to watch.  Special effects have come a long way, and the violence here is much more “Hostel” and much less 1980’s slasher.  Some of the stuff on screen will straight up make you cringe.

But it’s not all about violence.  Evil Dead is about deadites, possessed teenagers, witches, necronomicons, people walking that REALLY shouldn’t be able to walk…stuff that just doesn’t sit well with reality.  That is the genius of the 2013 film.  Somehow, it remains just as over the top as Raimi’s version, but it is so painstakingly dark, tense, and sadistic that surreal monsters become oh so ever believable on screen.  The completely unrealistic plot becomes feasible, and the violence, oh the violence!  It is quite a feat.  (OK so maybe it is about the violence after all.)

I have to note two of the major stars of the show; the original score by Roque Baños.  I had only really noticed his work before in “The Machinist,” but the music in this film is as terrifying as the images.  And then of course the heroine and antagonist of the film, Jane Levy, who obviously put a lot of herself into this role.  She is sweet and evil and beautiful and disgusting.  She needs to be the new scream queen. 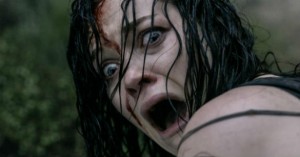 I think the last time I walked out of a horror remake as pleased as I am now was when I saw “The Grudge,” also a Ghosthouse Pictures production.  But this is not just a remake, this film is going to hold its own in the history of horror films.  It is its own beast while still respecting and honestly loving the source material (keep an eye out somewhere in the film for two cameos…I’ll give you a hint, one of them is a car, one of them has a chin.)

I’ll watch this again and again in theaters, buy the special edition bluray, check it out on cable, and eagerly awaiting the next installment from Fede Alvarez and/or Ghosthouse Pictures.  Horror is coming back…and it’s groovy.