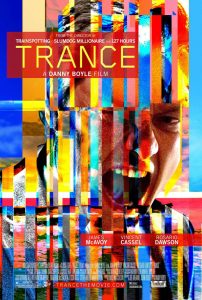 Danny Boyle is one of my favorite and one of the great modern filmmakers of the last twenty years.  His unique style and ability to make a film in a different genre each time he gets in the director’s seat has not only proved successful and earned him critical praise and awards, but it shows that he has limitless talent to entertain a wide variety of audiences across the globe. With his latest film, ‘Trance‘, Boyle shows he still has what it takes to make a modern noir movie with so many twists and turns, that eventually you  will give up trying to figure what’s going on in the story, and fall into Boyle’s “trance” of betrayal, thievery, and sex in this art heist thriller.

The main focus here is on an auction house employee Simon (Jame McAvoy), who is cahoots with three criminals to steal a painting from the 1700s by Goya, which in the film was auctioned off for over $41 million. In an elaborate scheme to pull off this heist, Simon’s partner in crime Francis (Vincent Cassel) hit him with a shotgun in the head, leaving Simon in the hospital for a few days with a case of amnesia. What we find out is, Simon hid the painting before making the handoff and now cannot remember where he stashed it. 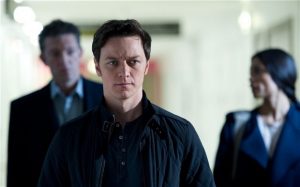 After a bit of brutal torture on Simon, Francis and his two thugs believe he has no idea where he hid the painting and thus tell him to seek hypnosis therapy to see if he can trigger his memory loss.  He seems to choose  random name out of the phone book of American therapist Dr. Elizabeth Lamb (Rosario Dawson), who is smarter than she thinks and figures out quickly that Simon is in trouble and that his cohorts are listening in to their sessions secretly.  Dr. Lamb convinces the group to join for hypnosis sessions and after she realizes what’s at stake, she insists on an equal cut of the prize.

From here, things spiral out of control into a frenzy of betrayal, lies, sex, and regaining painful memories that seem to advance the story on who really is in charge of this whole set up. For the most part, it seems that Dr. Lamb is in charge as she is the one conducting the therapy sessions with everyone, and things get a bit comical when Francis’ thugs are hypnotized in a therapy session, which is to showcase their biggest fears. Dawson’s performance of Dr. Lamb might be her greatest role to date as she exudes so much confidence and commands a very powerful performance, that we fall under her spell and are never cured. 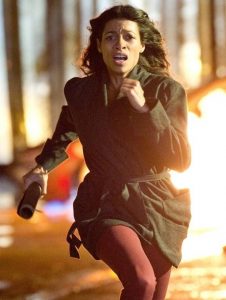 McAvoy turns in some brilliant work as does Cassel in their very flawed but emotional characters.  Particularly Cassel, as at first he seems to be just a basic criminal out for money, but there is more to him than just greed, and we really sympathize with him. And that is what Boyle does so well here. He captures the very human side of an epic crime, one of which we are thrown into a maze of deceit and blood, to which we may never come out of. The camera tricks and use of stylized colors here make every character pop and show their very different sides and motivations from Dawson’s full frontal nude scene to McAvoy’s descent into madness.

There has never been a heist movie told quite like this before, and even though we might not know what the hell is going on until the final moments of the film, it’s a gut wrenching visceral experience.  One that you won’t soon forget. 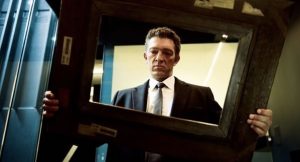