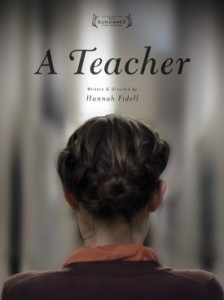 Hannah Fidell’s directorial feature debut, ‘A Teacher‘, is a disturbing film that has a brilliant performance from Lindsay Burdge. From the sulking score, to the long camera shots, this forbidden and illegal sexual tale spins out of control fast, but has a heavy psychological tone as we watch our main character descend into a steep downward spiral of madness and obsession.

Burdge plays Diana, a high school teacher who seems to be a loner outside the classroom, but once in class, she opens up and is very charismatic. We are thrown into the middle of Diana’s illicit relationship with one of her students, Eric (Will Brittain). We do not see how it all started, and we see scene after scene of the two having sex in different places whether it be in a car at night, Diana’s house when her roommate is out for the night, or at Eric’s parent’s ranch house near Austin, TX.

The pair seem to have the same feelings for one another, however the only thing we really see is a sexual relationship, though we clearly see that Diana is emotionally stunted and needs to have some gap filled in with this torrid affair. She even allows Eric to take control in the bedroom. soon we see that Eric is her whole life as she becomes very distant from her roommate and colleagues at school and when her brother comes into town, she quickly shuts down and leaves him sitting at the restaurant. It’s evident that her affair isn’t the first of its kind. When her roommate invites her to a party of people their own age, she wants to leave as soon as she gets there and spends the little time there texting Eric and looking at his pictures. It’s become an unhealthy obsession now. 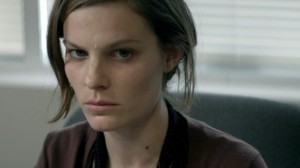 After an exposing photo makes the rounds at school of a freshman girl posing topless, Diana becomes scared and asks Eric to delete all of the photos from his phone that she has sent. Once this happens, she begins to question herself and her actions, but still continues on. When an employee of Eric’s ranch house almost catches the two of them in the deed, Diana calls the relationship off, but her unnatural obsession and sickness cannot be controlled, which leads to some very unfavorable moments, making the audience scream out “Nooo.”

Fidell’s camerawork is impressive and reminded me of Darren Aronofsky’s ‘The Wrestler‘ as we see the steady-cam shot from the back of Diana as she walks through the school and on her jogs completely alone. It’s very unsettling. Brittain plays the student lover very well as we never see him brag to his friends of his conquest, nor is he at all an annoying teenager or obnoxious. He is actually quite charming, level-headed, and always plays it cool, even when things spiral out of control. And then there is Burdge who does a phenomenal job in her role as she tries to box up her unnatural feelings all the while she seems wears her heart on her sleeve when it comes to her young lover. 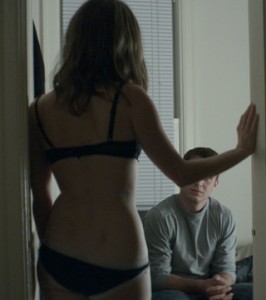 What keeps this film from being great is its repetitiveness. It’s a slow decent into a psychotic obsession that shows the same thing scene after scene of the two character having sex, only in different locations.  If there was a bit more character exploration, then ‘A Teacher‘ would have received an A. But due to its inconsistencies a flaws it receives a C for effort and acting.