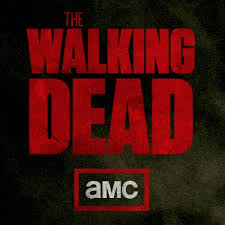 Good afternoon ‘Walking Dead‘ fans.  I hope that you enjoyed the episode last night. There are only three more left until the season finale so every scene, in every episode, is jam packed with vital information. Let’s get to it. Rick, Hershel and Daryl pull up to an abandon grain silo and factory. Hershel is staying in the car as watch. Daryl and Rick are making their way, gun and bow up, through the silos. Hershel looks down to make sure the guns that are strapped to his leg are ready to go. Rick and Daryl continue to run on the property. They come to a building. Rick walks inside the building and Daryl stays outside to keep watch.  There is a table with a couple of chairs already set up. The Governor walks out from behind the shadows and holds his hands up to show he is not armed. He says that we have a lot to talk about.

Rick aims a gun at the Governor. The Governor says that he is going to remove his weapon in good faith. Rick lets him remove his guns. The Governor wants Rick to remove his gun. Rick holds it to his side. The Governor sits down at the table. The camera pans down to a gun already tapped under the table. Daryl goes back to Hershel and tells him that The Governor is already there. Daryl tells him that it doesn’t feel right. Andrea, Milton and Martinez pull up in an SUV. Daryl asks why their guy is already in there. Andrea asks if he is there and Martinez smiles and says yes.  Andrea looks exasperated and walks into the building. She asks what is going on and the Governor says nothing, just small talk. Andrea proceeds to go into her speech about how they need to work it out. Rick tells The Governor how he knows about everything and the Governor blamed Merle about that.  The Governor says that they both know everything about each other and that they need to move on and forget the past.

Daryl is outside talking nervously to Hershel about how Rick does not need to be alone.  Milton tells him that the Governor thought it was best for the two of them to talk alone. Daryl asks who Milton is and Milton tells him that he is the Governors advisor.  Daryl and Milton a little war of the words and Martinez gets involved. Daryl bucks up to Martinez and Hershel says that they don’t need to fight right now. Carl, Michonne, Merle, Maggie and Glen are divining out ammo and locations. Merle talks about how they should go out and get the Governor. Glen tells him that they will stay there. 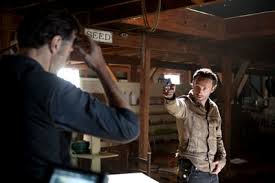 Andrea is still trying to run the meeting and the Governor cuts her off. Rick pulls out a map to have a boundary for the both of them. The Governor denies it. Rick gets agitated at Andrea about how she said that he was willing to talk. The Governor says that he is willing to talk, but Andrea had no authority to make a decision like that. The Governor lays out that he wants Rick and his gang to surrender to him. Rick says no. The Governor asks Andrea to step outside and when she says no, Rick looks at her and tells her that he came to talk to him. Andrea leaves and Rick sits down.

Rick and The Governor have small talk about what they do with each other’s groups. Rick brings up Merle and The Governor blames Merle for everything that happened with Glen and Maggie. The Governor brings up how his baby might be Shane’s. The Governor calls it restitution for failing to see the devil when he stood beside him. Rick says that he sees him beside him. The Governor then brings out whiskey. Milton tries to start a conversation about how everything will work out. Milton tells them about how he keeps his records for the future. They then hear some walkers and Martinez, Daryl and Andrea go after them. Martinez and Daryl get into a little contest to see who kills the walkers better. Daryl snags some cigarettes off a walker and offers him one. He declines, but they start talking about how they hate the walkers. Martinez says that they will not work anything out and they will eventually give the word to fight. Daryl agrees. Milton and Hershel are back in front talking about how Hershel lost his leg. Hershel tells Milton about how good the people are that took care of him. Milton wants to see Hershel’s leg and they kid about how they don’t know each other. 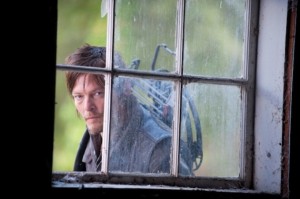 The Governor talks about how they both care about their people. Rick wants them to ignore each other and the Governor does not want to look weak in front of his people.  Rick says that that is his choice. The Governor gives a little speech about everything they had worked for in the past year. He then talks about how his wife died in an accident. You see how he is trying to lure Rick in to thinking he has some weakness.

Back at the prison, Glen is fortifying a chain gate for the upcoming battle. He comes back in and sees Merle loading up guns and ammo to leave. They ask him why he can’t follow the rules and Merle yells that it’s his brother out there. Glen tries to block him from leaving. Merle calls Glen a pussy for acting like this and they brawl when Merle tries to get past him. Beth shoots a gun off into the air to stop the fight.

The Governor says how he did not want any of this. He says that he was chosen because there was no one around. He also tells Rick that he knows about the guns he got. The Governor says that the fight will go down to the last man and that they should end it today and walk away. He then pulls up his eye patch to show his bad eye and tells Rick that he wants Michonne.  If he turns her over, it all goes away. He asks if one woman is worth all those lives in his prison, including his children. 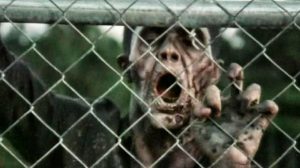 Michonne and Merle begin to talk. Merle wants her to go with him to kill the Governor. Merle says that they are strong and good fighters, but not killers. Merle asks if she is going with him and she declines. She tells him that if he gets people killed, it’s on him. Glen is watching the walkers when Maggie comes up. They talk about what happened and how Glen made it about him when she got assaulted. He says that she needed her space and she said that she did not need her space. She wanted him to see her. They kiss, say they love each other, and proceed to have sex on the floor inside of the prison.

Rick talks about how he doesn’t get how a man with big plans wants to waste his time on a “two bit vendetta”. He could get a statue and power. The Governor is not waiving from wanting Michonne. Rick asks if he gives him Michonne, how does he know the Governor will keep his word. The Governor says that he will give Rick whatever he wants. He gives Rick two days to think about it. Both groups leave and Andrea decides to go with the Governor. 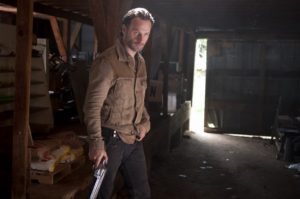 Music starts up as both parties go back to their “homes”.  The Governor tells Martinez to shoot everyone dead if they see them, but leave Michonne alive. Milton asks about the deal and the Governor says they can take care of the whole crew and avoid a slaughter. Milton says that is a slaughter. The Governor says not at their end and that they will have to eliminate Rick sooner or later to live peacefully. The Governor then thanks Andrea for setting up the meeting. She says glad that she can help. The Governor tells her that they will meet in two days and discuss the terms. When she asks what the terms are, he just smiles at her.  At the prison, Rick tells everyone that he met the Governor. Merle makes a statement about how he should have gone when he had a chance. Rick lies to them about the Governor wanting the prison.  Rick tells them that they are going to war. Rick walks out and Hershel goes to talk to  him after some time lapse. Hershel tells him that the group is taking it as well as expected. Michonne and Merle are convinced that they should hit first. He thinks that they should go out on the road. Hershel says that they are in it together, no matter what. Rick tells Hershel about his way out. Rick tells him that the Governor wants Michonee and Hershel says that he will kill her. Rick tells Hershel that the Governor is going to kill them anyways. Rick asks what if he doesn’t and giving her up is the answer. Hershel asks why Rick did not tell the group that. Rick says that they need to be scared. Hershel says that they are and Rick says good. Hershel says that Michonne has earned her place in the group.  Rick asks Hershel if he is willing to sacrifice his daughters’ lives for her. Hershel asks why Rick is telling him this and Rick says that he is hoping Hershel can talk him out of it.

Like I have been saying from episode one of this season, a war was coming and now it is finally here. The next three episodes will probably revolve around the groundwork and battle. There is nothing in this episode that particularly shocked me. I knew the Governor was going to kill them no matter what. I had a feeling that the people standing outside the meeting would talk and get to know each other. I am curious how that will affect the next few episodes. Andrea, like usual, bugs the crap out of me. She wants to feel more important than she really is. She is the bridge between both groups and that is her main purpose. Obviously, the Governor has lost interest in her. I am curious to what will happen between him and her. I am looking forward to next week’s episode and to your comments on this episode. See you next week. 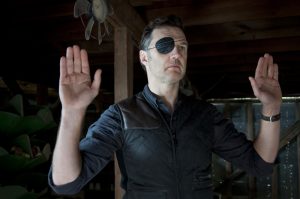