‘It’s Always Sunny in Philadelphia’ and ‘The League’ Have Been Renewed!!! 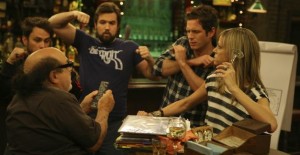 Just tons of FX news coming out today.  This is the third story on the network.  Please, no more until tomorrow unless it features Guillermo Del Toro’s ‘The Strain’ trilogy series.  But there is good news.  ‘It’s Always Sunny in Philadelphia‘, which is one of the funniest shows on television has been renewed for its 10th season while ‘The League‘ has been renewed for a 6th season.

Add to that, the series ‘Legit‘ has been renewed for a second season and all three shows will move to their new network, which we already discussed on FXX.  The new network will launch September 2nd, so hopefully we will get those new seasons at that point.  FXX plans to unleash four original comedy series and one late night talk show with an expansion to move to six comedy series in due time.

This is amazing.  I just hope IASIP stays on for another 20 years. Frank, Mac, Dee, Dennis, and Charlie have become iconic characters who I always want to watch and see what they do next.  And let’s hope for more Raffi and Dirty Randy in the next season of ‘The Leauge‘.  Your thoughts?