Film Review: ‘The Place Beyond the Pines’!!! 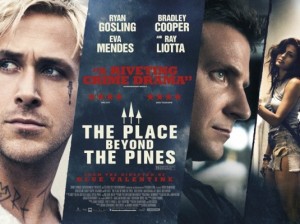 Director Derek Cianfrance is one of the better filmmakers today. Even this being his third feature film, he has consistently shown that he has what it takes to make a powerful and character driven film each time so far.  ‘The Place Beyond the Pines‘ is an intense look at the effects of certain actions passed on from father to son over the course of 15 years, and while this story packs a punch, it also fails to be told in the smoothest way as each act of the film is a different time with a different lead that changes direction too suddenly to keep a lucid flow.  However, this indie film might garner enough attention and box office success from its cast, which consists of Ryan Gosling and Bradley Cooper.

The film’s script is amazing, which was written by Cianfrance, Ben Coccio, and Darius Marder.  If you don’t know who Ben Coccio, I highly suggest you look him up and seek out a little film he made called ‘Zero Day‘.  However, the script suffers in the mid section a bit when we focus on Avery Cross (Bradley Cooper) who we see as a hard working and great guy who is doing a good job and has a great family.  However, as the story goes, he gets off track a bit and becomes this somewhat ignorant character for nor rhyme or reason.  But the first hour dealing with Luke (Ryan Gosling) as a motorcycle stunt rider and the last part of the film, which deals with his teenage son does a much better job of staying focused.

We first meet Luke in the opening shot of the film as we see a shirtless Gosling bruised and tattooed up.  We follow him as he puts on his jacket and helmet, walking through a traveling carnival and getting into a steel ball to ride a motorcycle upside down with other motorists. As the carnival stops in Schenectady, NY, he crosses paths with a past relationship named Romnia (Eva Mendes), who works as a waitress at a shoddy diner and has a new love in her life. But her feelings for Luke haven’t left, which leads Luke to find out that she is raising his infant son named Jason. 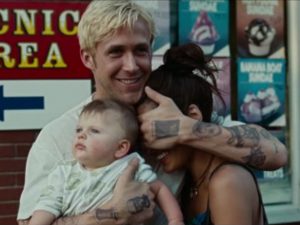 Luke desperately wants to be a part of his boy’s life, and not making enough money at the carnival, he takes on a job with an odd mechanic named Robin (Ben Mendelsohn). These two conjure up a plan to make more money by using Luke’s motorcycle skills to rob banks as a means to raise money for his kid and develop a decent life. However, news of these bank robbers are hitting the news and new cop Avery Cross (Cooper) crosses paths with Luke during a robbery, which leads to disaster.

We then center on Avery Cross and his journey to public office and all the toes and departments he steps on during the way.  This is where the story seems to lose a bit of steam as Cooper’s character isn’t drawn out coherently and seems to not make sense why he does these unorthodox things, which includes going after fellow cops, crooked or not.

Then suddenly, the film jumps 15 years into the future without warning as we see Luke’s teenage son Jason (Dane DeHaan) and Avery’s son AJ (Emory Cohen) meet each other at school and form a bizarre friendship, not knowing who the other one’s father is. However, once this is known, things take a turn for the worst as we see similar fates happen to these kids. It comes full circle as we see both kids follow the same mistakes their father’s made.

Gosling and DeHaan do incredible jobs here as we really feel their pain and struggle for them to do good, but always seem to clumsily screw it up. Bradley Cooper is as always, very charismatic, but his character seems to not flow in an organic way, thus making him not relatable.  Eva Mendes’ short performance is striking and believable as he gives her all as a confused woman who only wants the best for her son and family. And the cameo of Ray Liotta is decent as he plays the creepy crooked cop to a tee.

Cianfrance’s camera work is very impressive as he uses a mix between handheld and steady cams to show us the raw and physical state of his characters struggles.  We are really put in the face of the drama and tension with his camera angles.  Add to that Mike Patton’s eerie and affecting score, which sure drives up the turmoil of this multi-generational piece. ‘A Place Beyond the Pines‘ is a terrific yet tragic film that tries to tell us the effects of constant bad decisions passed down from generation to generation, despite its lumpy and abrupt flow.

Be sure to check out my interview with Derek Cianfrance by CLICKING HERE!!!