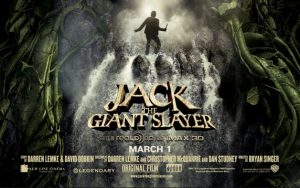 Fairytales are always fodder for reinterpretation and expansion in movies. Sometimes they fall flat and sometimes they add to the beloved story we knew as children. The movie Jack the Giant Slayer stays true to the whim and wonder of the original story and adds in a bit more for the modern movie fan.

Jack is a farm boy who is fascinated by a legend that claims giants are real and once terrorized his kingdom. As the young Jack hears the story from his father, animation much like that used to tell the story of the Deathly Hallows in HP7 takes us through the basic fairytale. Across the kingdom, in the safety of her castle, the princess Isabelle is hearing her mother’s story of the same legend. The two children are both excited and scared by the story and the parents encourage a sense of adventure and bravery in telling the story.

We then fastforward several years to find Jack (Nicholas Hoult), now fatherless and living with his uncle, on his way into town to sell a cart and horse – from his uncle’s admonishments, we know that Jack is an unreliable dreamer. When in town, he is drawn to a puppet show featuring his favorite legend and during the show he defends the honor of a cute girl who turns out to be Princess Isabelle. From this moment, Jack’s life will be changed forever even though he doesn’t know it yet. In spite of Elmont’s (Ewan MacGregor), the princess’s personal guard, warning, Jack can’t help but think of the beautiful royal. Jack encounter’s further excitement when a monk forces him to trade his horse for “magical beans” and then disappears.

Meanwhile, back at the castle, Princess Isabelle (Eleanor Tomlinson) is tired of being protected, but King Brahmwell (Ian McShane) will not risk losing his only child, having lost her mother several years before. The king has chosen his main advisor, Roderick (Stanley Tucci), to marry Isabelle and lead the kingdom. Unsatisfied with her lack of adventure and her appointed suitor, the Isabelle rides out into a dark and stormy night to escape. As fate would have it, she happens upon Jack’s farm to escape the storm. While the two young people realize how interested they are in each other, the plot quickens – during the deluge, Jack’s beans touch rain water and quickly sprout and sends vines heavenward to the giant’s floating kingdom. Jack tries to rescue the princess, but is unable to cling to the vines. 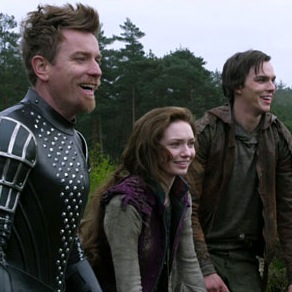 When the king finds Jack at the foot of the vines, he sends him back up with Roderick and the personal guard to rescue Isabelle. From here, the movie is very fast-paced. Humans running from and being eaten by giants, humans fighting humans for control of the kingdom, and along the way, humble Jack is able to outsmart all of them and become the hero of the day.

The pace is very fast and the plot not extremely complicated. The movie is rated PG13, so it is not expected to be adventure and story on the level of Lord of the Rings. The movie does seem to

Considering the aforementioned human eating, it should remain a solid PG13. Another factor in its rating is the human on human violence. Roderick’s toady, Wicke (Ewen Bremmer), at first seems like a gleeful jester but turns out to be a menacing and cold-hearted killer who gets a sadistic kick out of being evil. There is quite a bit of scatological humor that will play well with younger people. The writer and producers are giantists, portraying them as a filthy and grotesque species who eat boogers and scratch and smell their armpits. Thirteen years olds love it probably, but after a while it was tired for an adult.

The graphics of the movie are great. The giants are bit more cartoonish than really seeming to be actual creatures, and it would have been fine to delete the head giant’s parasitic twin.  However, the rapid and sprawling growth of the vines and the 3D effects make it enjoyable and work to enhance the feeling of apprehension in many scenes. The acting is hammed up quite a bit, but Jack is adorably impish, Elmont cavalierly brave, King Brahmwell terse and commanding, and Roderick conniving and evil. Princess Isabelle at times seems adventurous and Brave, but the writing only let her do this long enough to get into trouble and then it was up to others to rescue her. It seemed that they could have given her a little bit of a chance to share in the hero spotlight. 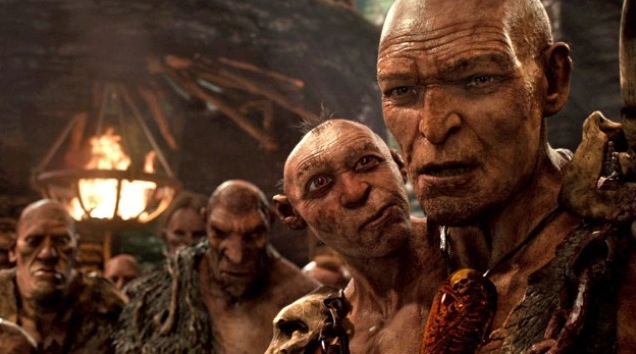 Overall, Jack the Giant Slayer is a great movie to see in 3D if you have kids who enjoy fantasy, though this isn’t really a movie that will do well out of the age group it is rated for. Still, it includes enough adult humor to engage parents accompanying their children.