CW is Bringing Back ‘Whose Line Is It Anyway?’!!! 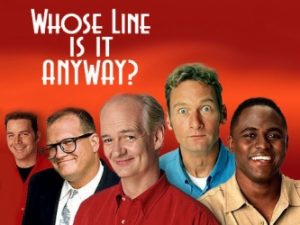 The CW is going for laughs this summer by ordering a new take on the hit improvisational comedy series, WHOSE LINE IS IT ANYWAY?, hosted by comedian Aisha Tyler (“The Talk”), it was announced today by Mark Pedowitz, President, The CW.   Premiere information will be announced at a later time.

The CW’s WHOSE LINE IS IT ANYWAY? features the return of Ryan Stiles, Wayne Brady and Colin Mochrie, who along with a special guest each episode, must put their comedic skills to the test through a series of spontaneous improv games. Prompted only by random ideas supplied by the studio audience and host Aisha Tyler, our four performers must use the little information they have and their wild imaginations to depict different characters and an array of scenes, as well as perform songs.  After each round of improvisation, Aisha will dole out points to our four performers and declare a winner at the end of every episode.

Based on the wildly successful U.K. format, which also spawned a previous incarnation in the US that ran for eight seasons on ABC, WHOSE LINE IS IT ANYWAY? is executive produced by Dan Patterson, Mark Leveson, Jimmy Mulville, Ryan Stiles and Wayne Brady.  Co-created by Dan Patterson and Mark Leveson, WHOSE LINE IS IT ANYWAY? is from Angst Productions and Hat Trick Productions.

This is amazing news. I was really fond of this show and keep watching clips of it on youtube when I get the chance. It’s not going to be the same without Drew Carrey, but at least the others are coming back for it.   I can’t wait.