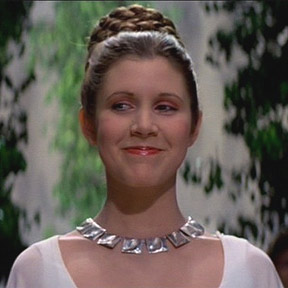 That’s right, folks. Carrie Fisher has just confirmed that she will reprise her role as Princess Leia for J.J. Abrams’ upcoming new ‘Star Wars‘ film. Fisher is now 56 and said that she will be in at least one more ‘Star Wars‘ picture, with the possibility of more. As we previously reported, Harrison Ford, has already signed on to play Han Solo again, and now we are awaiting word for Mark Hamill and Billy Dee Williams to sign contracts as well.

Fisher told the Palm Beach Illustrated what she thinks Princess Leia would be like today, to which she replied, “Elderly. She’s in an intergalactic old folks’ home,” before adding, in seriousness: “I just think she would be just like she was before, only slower and less inclined to be up for big battle.”

This is all happening, finally once George Lucas sold his claim to fame to Disney a couple of months ago to the tune of $4.1 billion dollars, and since then, Disney is developing several ‘Star Wars‘ projects. Will we see the famous bagel bun hairdo?  Will she wear the slave Leia outfit again?  Only time will tell, but expect more information soon on more casting.