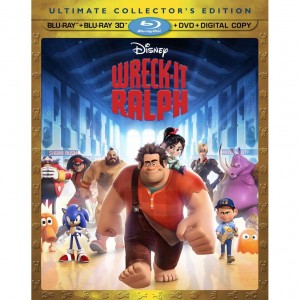 ‘Wreck-It Ralph‘ is one hell of a fun and entertaining movie. Not only will the little kids enjoy this, but adults will eat this up too.  Disney has done a a great job with their 3D animated comedy to start the holiday season.  The amazing voice cast, the video game references, the characters and storyline can all compete with the likes of any Pixar film.  Well, I guess you can get a phenomenal film when you have John Lasseter executive produce and Rich Moore direct.  Moore has directed tons of episodes of ‘The Simpsons’ and just about every episode of ‘Futurama’, so you know this will be a funny and intelligent film done right.

‘Wreck-It Ralph’ is a nostalgic 80′s retro arcade game in 8-bit, as you will se in Disney’s 8-bit intro, which I think was a nod to Edgar Wright’s ‘Scott Pilgrim vs. The World‘.  Actually, the game is called Fix-It Felix Jr. and  ’Wreck-It Ralph’ is a giant, super strong 600 pound man who is the villain of the game.  Much like Donkey Kong,  ’Wreck-It Ralph’ (John C. Reilly)  climbs a populate high-rise condo building and destroys the building.  It is up to Felix Jr. (Jack McBrayer) to fix the building with his magic hammer as he tries to avoid falling objects level by level.

Much like Pixar’s ‘Toy Story’, instead of the question of ‘What do your toys do when you leave the room?’, it’s the question of, ‘What do the video game characters do when the arcade closes?’  Ralph is unhappy with his station in life as the first scene shows Ralph in a villain support group complete with the villains from all the games you loves growing up.  For decades now, Ralph has been looked down upon n his game by the other characters and he would just like an ounce of respect and even to be invited to their parties.  Nobody likes him simply because he is the bad guy, however that is not the case.

Since Felix Jr. wins medals for every level in the game, Ralph thinks that if he gets or wins a medal, people will like him too and start treating him nicely.  So Ralph travels through the arcade’s power cords to the large surge protectors, which is called Game Central Station, the portal to every game in the arcade.  Ralph hears that the first person shooter game, ‘Hero’s Duty’, a new game much like a sci-fi version of ‘Call of Duty’, awards medals for bravery, so Ralph sneaks in and suits up as a member of the elite army under the tough as nails Sergeant Calhoun’s (Jane Lynch) squad to battle millions of Cy-bugs, a ferocious half robot, half spider.

Ralph steals the medal from ‘Hero’s Duty’ and jumps in a spaceship to head back to the  ’Wreck-It Ralph’ game, however due to his inability to fly, he ends up crashing the plane in another game called ‘Sugar Rush’, a mix between Candyland and Mario Kart.  Not to mention that one of the Cy-bugs was on board when Ralph crash landed in ‘Sugar Rush’.  Here, Ralph meets Vanellope von Schweetz (Sarah Silverman), a little girl who desperately wants to compete in the next big race in ‘Sugar Rush’.  Schweetz, however needs a gold coin to compete in the race, and sees how Ralph’s gold medal resembles a coin, steals it and uses it to race.

However, the supposed ‘King’ of ‘Sugar Rush’, King Candy (Alan Tudyk) does not like Ralph nor Schweetz and treats them poorly.  Here, Ralph befriends Schweetz and helps her enter the race in order to get his medal back.  Ralph helps Schweetz break into the unique racecar factory and helps build her a car.  Meanwhile, Felix Jr. has left his game and joined forces with Calhoun to search for Ralph and kill Cy-bugs, before ‘Sugar Rush’ is completely taken over and destroyed for good.

Phil Johnston and Jennifer Lee did a phenomenal job on the script for ’Wreck-It Ralph’.  They perfectly took two outcasts and showed their struggles to be accepted and free.  The chemistry between Ralph and Schweetz is adorable as Schweetz has the spark and humor that Silverman does in real life.  Silverman, Reilly, McBrayer, Tudyk, are joined by Ed O’Neill, Dennis Haysbert, Joe Lo Truglio, and Mindy Kaling to name a few, and all do a fantastic job in lending their voices to these unique characters.

The 3D was very good with this film.  I’m not normally a huge 3D fan, but here it was executed very well with the millions of Cy-bugs flying at the screen and other objects being tossed around constantly.  The depth was unreal in these video game terrains.  Not only was ’Wreck-It Ralph’ fun for everyone, but it has a good story and great characters.  There is something in this movie for everyone.  Disney knocked it out of the park with this film. 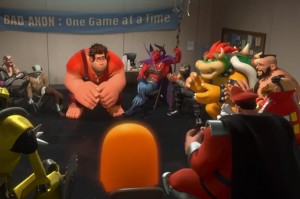 ‘Wreck It Ralph‘ comes with a demo-worthy 3D 1080p HD transfer and is presented in 2.39:1 aspect ratio from its 2.35:1 ratio. This is flawless.  If you want to show someone just how kick-ass your image quality is on your setup and how cool 3D can be, show them this blu-ray, and I bet you 10 times out of 10, they go and purchase your same setup and this blu-ray. The 3D here is pretty phenomenal and coincides with each game in the film. We see some fun 8-bit 3D graphics when Ralph is in his game and when we move onto the more advanced games in the flick, the 3D is eye popping. There is so much depth to the film, that it seems like the image itself goes on and on. The colors are very vibrant and sine throughout. And everything is detailed to the most minute respect. Disney did a damn fine job with this release, scratch that, they did a perfect job.

This release comes with an impressive and demo-worthy lossless DTS-HD 7.1 audio mix and sounds perfect. The dialogue is crystal clear and is very easy to understand. The dynamics on this mix is incredible. The surrounds and rears boast the ambient noises and sound effects like it was 1st nature to them, all with flawless directionality. The bass rumbles quite often here too, especially when we are in ‘Hero’s Duty’ and in the Diet Soda Mountain. The voice acting was amazing, and through this audio presentation, you might just want Sarah Silverman to get some award for her voice work. It’s truly phenomenal.  This is an AWESOME audio mix. 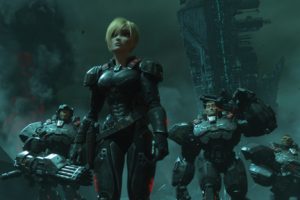 ‘Paperman’ Digital Short (7 mins.) – Here is the black and white short cartoon before the actual feature, which deserves to win all the awards. This is a must watch.

Bit by Bit: Creating the Worlds of ‘Wreck-It Ralph’ (17 mins.) – Here we see the director and other film crew tlk about creating the different video game worlds in the film. This is definitely worth checking out, as you’ll see just how much detail went into creating all of theses different types of worlds.
Disney Intermission: The Gamer’s Guide to ‘Wreck-It Ralph’  – Just like on ‘The Muppets’ and ‘Peter Pan’, when you press the pause button, instead of freezing the film, you are treated to some fun entertainment. Here, Chris Hardwick talks about the film and video games.
Alternate and Deleted Scenes (with optional commentary by director Rich Moore) (15 mins.) – Here are a few scenes left on the cutting room floor with optional commentary and an intro by Rich Moore. Not all scenes are completely finished either, but this is cool to see how different the film could have been.

Video Game Commercials (3 mins.) – Here are four awesome fake commercials for the video games depicted in the film. This is a must-see.

Trailers (14 mins.) – Here you can see all of the trailers from the start of the disc.

‘Wreck It Ralph‘ is one hell of a fun movie.  One I will watch over and over again, always wanting to show it to someone who hasn’t seen it before. I couldn’t have asked for a better Disney animated film that wasn’t Pixar. The video and audio presentations are demo-worthy here, and the extras are a little on the light side, but what is given’ sells. This is a must own.  If you have the means to get the 3D version, definitely get that one. Otherwise, this is a must own blu0ray not matter what format.  Highest Recommendation.