‘Zombieland’ to Become a TV Series Through Amazon!!! 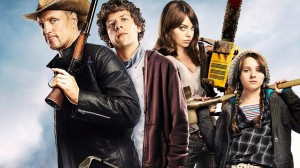 ‘We’ve written about the possibility of a ‘Zombieland‘ sequel before, and even it becoming a tv series, which was the original intention of the original before it became a feature film. Well now, Amazon is looking to develop the new series based on the hit movie. They are in talks right now with Sony for the rights to the project. The project is expected to be a 30 minute comedy horror series with either a pilot episode first or a full on series.  Either way, I’m happy about this.

We talked about two other Amazon original series today, but if this actually gets the greenlight, then man, Amazon has one amazing schedule of original programming, which will give Netflix a run for their money. The original ‘Zombieland‘ writers Rhett Reese and Paul Wernick are on board to write the series as well as producers along with producer Gavin Polone, who produced the original flick. Director Ruben Fleischer is not set to direct as he has a few other projects on hand right now, but we do hear that Eli Craig is being courted to helm the project. Craig directed the fun-as-hell ‘Tucker & Dale vs. Evil‘, which if he takes on ‘Zombieland‘, I’ll be just fine with, as he is a big fan of the film.

I can only hope that Woody Harrleson, Jesse Eisenberg, Emma Stone, and Abigail Breslin would return to their roles at least for one season, but knowing their popularity right now, it might be difficult to get them.  However, they should do this for the first season, and then maybe focus on a new group of survivors.  I hope that’s the route they take.  Can’t wait for this. Your thoughts?