Kristen Wiig has officially joined the cast of ‘Anchorman 2‘, according to director Adam McKay. The official title is ‘Anchorman 2: The Legend Continues‘ and has everyone returning for the sequel. Even Christina Applegate congratulated Wiig saying, “Just found out Kristen Wiig officially on board for Anchorman 2. Cannonball!”woohoo! That’s so great.”

So far right now, we have no idea what character she will be, but we think it will be a hefty role. We heard this news from Mckay’s twitter account when he announced the good news.  Wiig is an amazing talent as she has showed us time and time again from her SNL days to ‘Bridesmaids‘ to her voice as Lola Bunny on Looney Tunes.  I cannot wait for this film. 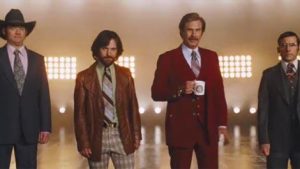