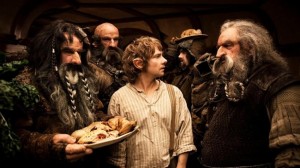 I’m not too surprised at this and congratulate everyone involve with this, but this happend, because of the extra charges for 3D and the 48 fps.  I’m curious to see how much all three ‘Lord of the Rings’ films would have made if they charged what they did with ‘The Hobbit‘ back then.  So far, ‘The Hobbit: An Unexpected Journey‘ has made over $940 million worldwide since it debuted in theaters December 14th.  This is more than ‘The Two Towers‘ and ‘Fellowship‘.

‘The Hobbit‘ joined the $100 million in five days club and has made $293.2 million in the USA alone.  The next film in ‘The Hobbit‘ series will be released in December, with the third one coming out in July of next year. I’m curious to see if any of ‘The Hobbit’ films win Best Picture and cross the $1 billion dollar mark, like ‘Return of the King‘ did.

But this is huge news. I bet the sequel will make even more. Your thoughts?