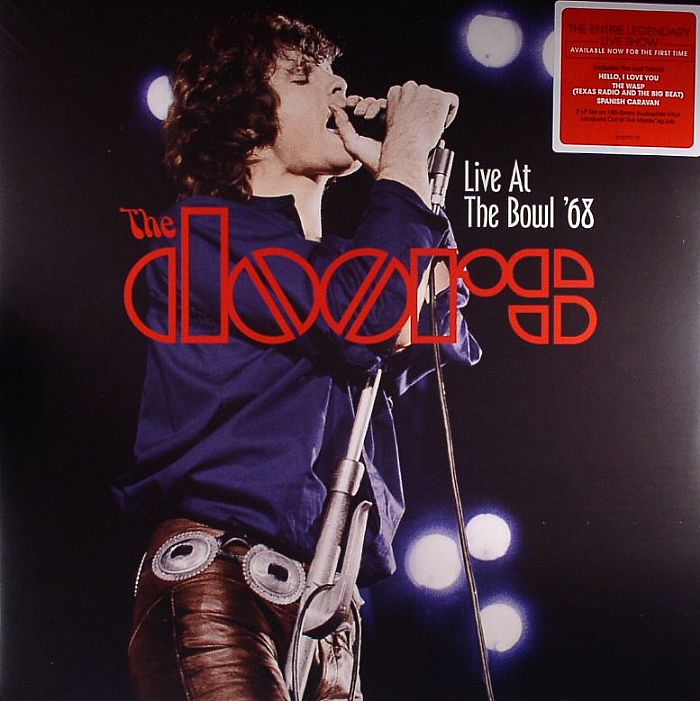 I don’t know about you guys and gals, but the 2012 Holiday Season was pretty bitchin’, in terms of all the new and vintage vinyl I was able to get my hands on. Needless to say, there is still some choice vinyl gems that are on my wish list, but at least The Doors: Live At The Bowl ’68 double LP now resides in the permanent collection.

Frankly, I can’t stress enough how great this collection is. Most Doors fans are probably already acquainted with their July 5th, 1968 set via their “Absolutely Live” release, but this new release features their entire live set, including the newly restored tracks “Hello, I love You”, “The Wasp (Texas Radio and the Big Beat)” and “Spanish Caravan,” which the later is hands down one of the best songs The Doors ever recorded.

On this double vinyl set, you hear The Doors at the apex of their creative brilliance, and the young and charismatic Morrison never sounded better on record. There is no doubt the band was truly in their prime in the Summer of ’68, when the lid the ‘hippy flower power’ was quickly shutting on the counter-culture. The Doors certainly were the house band of the turbulent and tumultuous late 1960s.

Lots of audiophiles shun vinyl reissues over their original releases, but here they can make an exception, seeing is how this is the first of the full Hollywood Bowl release. Vintage or reissue, there is nothing like being the first to open a new record of classic rock (or any genre for that matter) put the record on the platter, drop the needle, and hear (with little to no noise crackle or pop) the full, awesome sounds that are contained within. Morrison, Robbie Krieger, Ray Manzarek and John Densmore sound clear as day on this high quality 180g audiophile pressing. In my humble opinion, is probably the best and cleanest Doors live recording that’s even been officially released. Even the crowd sounds great. Turn the stereo up to 11 and close your eyes while you listen, and you’ll swear you were there that day. You can hear the fireworks at the end of “Light My Fire.”

It’s a great companion piece to your other Doors records, and if you already own the DVD or blu-ray of the performance. Frankly, you don’t get the warmth of the sound from the video discs as you do from the vinyl, but they equally pack a whopper of a punch, musically. The film is really something to experience on its own merit, but the double vinyl release is something else, too. I still think prices for new vinyl records are a bit extreme and overblown, but any vinyl junkie like myself will pay the price for the goods.

My only real complaint about the vinyl release is that is does not come with an additional download code, like all new vinyl record releases should. Hello record companies…it’s a smart business move to make your vinyl releases have the ability to be downloaded for the road, too! Worse case scenario? I sit a rip the entire vinyl set to my iTunes, but that takes more time than I usually have.

Regardless, this show blows me away, and the vinyl release is truly a gem in The Doors catalog. Any casual or hardcore Doors fan will want this, if you don’t have it already. The vinyl and blu-ray combined will probably set you back about $60, maybe less, but you’ll thank me later.

2. When The Music’s Over

1. The Wasp (Texas Radio and the Big Beat)