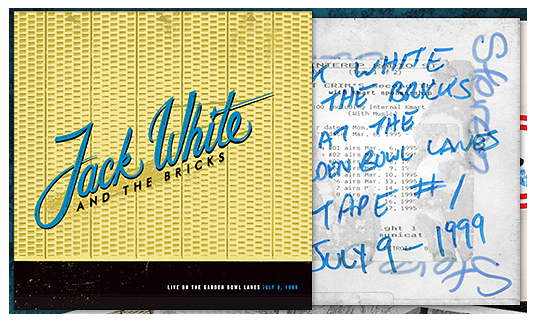 We’re obsessed with the working genius of Jack White, and we’re happy to hear he is at it again, sifting through his obviously large treasure vault, offering rabid fans access to more rarities via his Third Man Records Vault Subscription Service, this time with a live album of the short-lived band, Jack White and The Bricks, some pre-Raconteurs demos and DVD of a Whirlwind Heat + White Stripes tour for Vault Package 15.

The ‘Jack White and The Bricks‘ 12″ release is of a 1999 live recording taken from their performance at Detroit’s Garden Bowl Lanes, a show performed smack in the middle of lanes 11-14. It will be pressed on bowling pin white vinyl, and features a bevy of early Stripes classics, like “The Union Forever’, “Dead Leaves And The Dirty Ground”, as well as a few choice Bob Dylan and ? And The Mysterians covers.

The 7″ single this time around consists of a couple of early demos of “Steady As She Goes” and “The Same Boy You’ve Always Known”, recorded prior to the formation of White and Brendan Benson’s band, The Raconteurs, which, according to White, sound entirely different from what fans know and love. It will be pressed on electric yellow vinyl with standard vault sleeve.

Occasionally, Vault members are also treated to visual goodies, as well, and this time around sees a rare tour DVD titled “White Heat”, featuring Whirlwind Heat and The White Stripes on the heels of their 2002 European tour. For the first time ever, you can hear audio samples of these vault releases on the Third Man Records website. But act fast…the cut-off to get your hands on this limited edition package is January 31, 2013. Otherwise, you’re at the mercy of eBay after the fact, and it won’t come cheap!