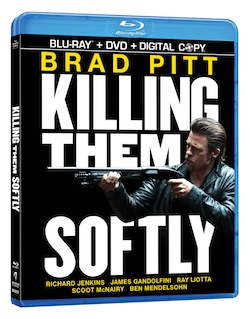 ‘Killing Them Softly’ has been announced for home video release by Anchor Bay Entertainment and The Weinstein Company for a release date of March 26th of this year.  The film will come with a blu-ray/dvd/digital copy combo back and has yet to announce any of the extras yet.  I hope there are commentaries and deleted scenes and a behind the scenes on some of the fight segments. I really liked this film as you can see HERE. Below is the press release.  Can’t wait.

Anchor Bay Entertainment and The Weinstein Company announced today the release of KILLING THEM SOFTLY, available on DVD and Blu-ray™ + DVD Combo Pack March 26, 2013. The film was written and directed by Andrew Dominik (The Assassination of Jesse James by the Coward Robert Ford).

The KILLING THEM SOFTLY Blu-ray™ + DVD + DC Combo Pack special features include Deleted Scenes and The Making of Killing Them Softly.

Learn more about KILLING THEM SOFTLY at: www.killingthemsoftlymovie.com.