HBO’s ‘Bored To Death’ Is Headed To the Big Screen!!! 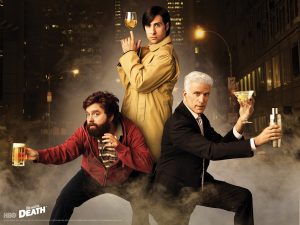 Good news, everyone! HBO is bringing back ‘Bored To Death‘ as a theatrical film, which they have already put into the development stages with series creator Jonathan Ames set to write.  ‘Bored To Death‘ had three seasons before not receiving a renewal back in 2011, which made me sad, because it was an amazing and hilarious show that starred ‘Jason Schwartzman, Zach Galifianakis and Ted Danson.  It was a big cult hit and had a sizable loyal following, but not enough to air more seasons.

We hear that the film will have the same characters as they band together to to solve mysteries, fight crime, and most of all get into trouble.  Their are no deals set in stone with the actors yet, although they have all expressed interest in reprising their characters again, so it’s only a matter of time.  HBO is pretty hardcore about getting their old shows put on the big screen.  It was done with ‘Sex and the City‘ twice, and ‘Entourage‘ is in production for a feature film.  Now if we can just get ‘Six Feet Under‘, ‘The Soporanos‘, ‘Carnivale‘, and ‘The Wire‘ in a big screen adaptation, all will be right with the world.