Film Review: ‘Not Fade Away’! 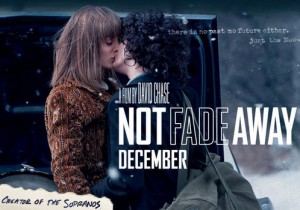 David Chase, mostly known for being the creator and show-runner on HBO‘s ‘The Sopranos‘, marks his first feature film directorial debut with ‘Not Fade Away‘.  I didn’t know what quite to expect from this coming of age film that relies heavy on music of the 50s and 60s as well as political and social issues to further the story, but from  what the trailer showcased, I expected more of a ‘That Thing You Do!‘ type of film, which chronicled the rise and fall of a local band to fame and fortune.  That is not the case with ‘Not Fade Away‘.  Instead we get something a little more in the way of growing up in turbulent times and dealing with change. By all means, Chase made a solid film, but it is not without its flaws.

‘Not Fade Away‘ takes it title from songs made famous by The Rolling Stones and Buddy Holly and seems to capture the major changes that were going on in the 60s with the music and the civil rights movements, which Chase seemed to showcase perfectly.  I’d imagine that everyone alive during those times can relate in some way or another to the characters. One of the things I really enjoyed was the use of pop culture in the form of music, film, and television that had our characters search for themselves and who they wanted to be, not just by the changing social and political climate of the time, but by the music of The Kinks and The Rolling Stones, and the hit television series ‘The Twilight Zone‘.

We center on 18 year old Douglas (John Magaro), who is virtually ignored by the girls at school and forms a band who with his friends Gene (Jack Huston) and Wells (Will Brill) that play covers of rock and blues songs for their friend’s parties.  Douglas, being the drummer has to take on the role of lead vocals after their lead singer has to miss their gig due to swallowing a lit joint, thus proving Douglas’ better vocal skills.  Their ultimate goal is to play music for a living, however that proves troublesome as some go off to college and some work steady jobs. 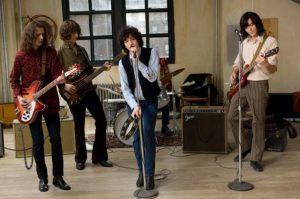 Not only do we see the internal struggles of the band, but we get a glimpse of Douglas’ home life, which seems to be the stereotypical middle class family who are having problems with their son wanting to be an artist.  Douglas’ father Pat (James Gandolfini) constantly tells his son that he looks like he “just got off the boat”, because of his changed style of waring a pea coat and heeled boots with a long curly hairdo, reminiscent of a young Bob Dylan. And his mother (Molly Price) does not have a positive bone in her body and always finds the worst in every situation, and all comes to a head at an awkward family dinner.

But when Pat is diagnosed with cancer, he brings his son in closer as he will be the head of the household soon and tells him of his own life regrets in hopes that his son will pursue his artistic side, a thing he wasn’t able to do, which pushes Douglas forward into discovering what he wants to be.  We also get a look inside of Douglas’ relationship with his girlfriend Grace (Bella Heathcote), and her upper class conservative family who is dealing with another daughter being schizophrenic and their fear of change. 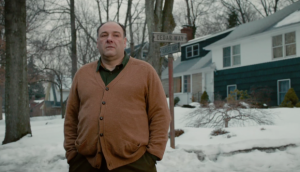 What was difficult to really fall in love with ‘Not Fade Away‘ was each of its scenes not having an end or really being a cohesive overall story.  It seemed that there were no full scenes in the film, but rather short bits of a scene all pulled together to make a film.  I’ll admit, it is an unique way of storytelling and it was a fresh way to move characters towards an end, but there were too many things left untouched and without resolution. The characters though are all perfectly molded in which we see their strengths and weaknesses growing up in the 60s and the decisions they make, which seem to show their outcome, although we never get a glimpse of it.

The acting by Magaro and Heathcote are great and seem to really capture the audience in that we want them to succeed.  Gandolfini seemed to reprise his role as Tony Soprano, but without all the mafia ties, which I guess is good.  The look of the film itself is spot on of the time and can be compared to the set design and direction of ‘Mad Men‘ on AMC.  Those of you who grew up in this time period will have flashbacks growing up by seeing the clothes and sets.  If you are looking for a light hearted film about a band making it big, this is not the movie for you.  Despite its gloomy tone and bizarre way of story telling, ‘Not Fade Away‘ is a film that will be enjoyed by music lovers and 1960s enthusiasts.