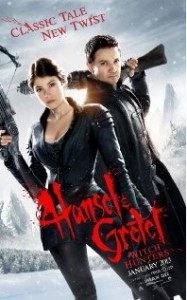 Most people hold special nostalgia for the fairytales they grew up with, making new spins on these classic stories difficult to handle. Many fail by adding too much to the original story, and while Hansel and Gretel: Witch Hunters doesn’t really succeed, it actually does well to not take itself too seriously and pay homage to the tale, using it as a launchpad for a continuation of the gruesome Grimm Brothers tale. Though not a movie that will become anyone’s favorite or have much of a shelf life past 2013, it’s a good time for those who like to enjoy rolling their eyes at camp movies.

We begin the movie with the fairytale everyone knows; Hansel (Jeremy Renner) and Gretel (Gemma Arterton) being led into the woods by their father and left, but where the original story blames this on an evil stepmother who does not want to feed the children, the movie implies that there is something more to the situation. After a night in the woods, the children try to search for their way back and stumble upon the candy house. From the appearance of the first witch in the story, it is obvious that the makeup artists and CGI crew earned their paychecks – the character is truly evil and grotesque looking as she forces Hansel to stuff himself with candy. Ultimately, the kids escape and are now psychologically damaged enough to pursue their careers and attempt to kill whatever witches they can get their hands on.

Fastfoward several years and the siblings arrive in the village of Augsburg to help town officials hunt down a very evil witch (Famke Janssen) that has been taking children. The local sheriff (Peter Stormare being very Peter Stormare) feels threatened by the newcomers and tries to thwart their efforts – really this part of the story doesn’t do much except set up some gruesome minions vs. witches/minions vs. troll scenes. In spite of the sheriff, Hansel and Gretel make inroads to finding the witch and find out that there are multiple witches, and they are taking the children to cast a spell that prevents the witches from being killed by fire. The spell can only be conducted on a blood moon, which only happens every few years.To help them in their pursuit, the professionals make friends with townies Ben (Thomas Mann) and Mina (Pihla Viitala) and a pretty endearing troll named Edward. 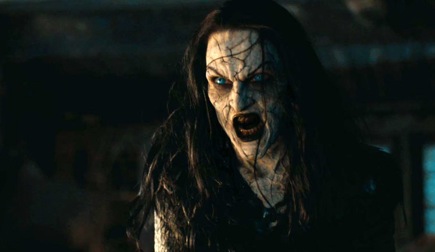 As they dig deeper into the story, Hansel and Gretel discover they have a larger connection with the witches’ plot and find out the truth about the night when they were abandoned and taken by the witches. It turns out there are good witches and their mother was one of them – she sent them away to keep them safe and prevent Gretel from being used as the last piece necessary to complete the spell during the previous blood moon. With all of this information, they are able to confront the witches, save the kids and take out a witch that they thought they killed so very long ago.

I reviewed the IMAX 3D version of the movie and though not always necessary for the scenes in the movie, there were some interesting fight scenes and opening credit animation that benefited from the effect. The fight scenes in general are fast and dizzying, mixing in steampunk styled weapons and brutal blows. The witches display some wicked broom skills and seem like they could have taken Harry Potter on his best day. Also, keep in mind that this is an R rated movie with many scenes that include a high level of gore – imagine what it might be like to see a man’s head stomped into smithereens – but director Tommy Wirkola doesn’t revel in it or make it the main focus of the movie.

As for the acting and overall feel of the movie, it’s supposed to be campy, but this doesn’t really work all of the time. Renner at times seems a bit bored with what he’s doing, and to pull off this kind of movie you have to be a bit more willing to give into your goofy side. Arterton delivers one liners with gusto, but ultimately most of them land too heavy. For witch hunters, the siblings are not great detectives – they wait until the thick of battle to make some important connections about the missing children. This is supposed to heighten the urgency, but I sat there thinking maybe we should have asked these questions from the get go. I did enjoy the tiny little add in that Hansel now has diabetes due to his childhood imprisonment and candy force feedings, but really that’s just because isn’t that we all think when we read the fairytale?

The 3D graphics are not enough to justify the cost of going really – if you are into steampunk and witches, sure you should go and pay money to see this. If you want something to chuckle at when it shows up on Netflix, this will be a good movie for that, but like Grimm Brothers and Van Helsing before it, Hansel & Gretel: Witch Hunters will ultimately be one of those movies you vaguely remember watching and thinking, “Meh.”