Cory and Topanga’s Daughter Is…..

I know all of you have been on the edge of your seats in anticipation for the sequel series of ‘Boy Meets World‘, which is titled ‘Girl Meets World‘, since we reported on the new show from Disney.  We said that the new series will focus on the daughter of Cory and Topanga, which Ben Savage and Danielle Fishel have officially signed on to reprise their roles in the new series.  Well, Disney has now cast the daughter role, which went to 11 year old Rowan Blanchard.

Her character name is Riley Matthews and Blanchard won the role after a nationwide search. Producer Michael Jacobs said, “As soon as Rowan walked into the room, I was reminded of why Ben Savage was loved as Cory Matthews. Rowan is real and accessible and I am hopeful this girl is about to meet a world that will love growing up with her as well.”

Blanchard was in ‘Spy Kids: All The Time In The World in 4D‘, and  ‘The Back-Up Plan‘, according to EW. The pilot episode will start shooting next month, and we expect a full series order very soon for a winter debut.  Congrats Rowan. 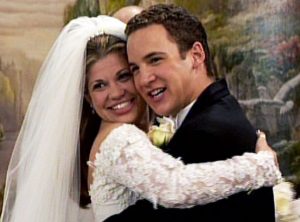