Check Out The New Trailer for ‘The Iceman’, Starring Michael Shannon!! 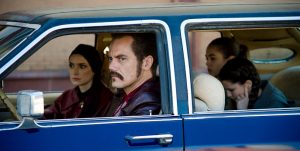 Oh man, this movie looks so good.  Michael Shannon might be one of the best actors out there right now.  Everything he’s in is amazing.  His role on HBO’s ‘Boardwalk Empire‘ is creepy and yet satisfying. And I know he is just going to be the best Zod in the upcoming ‘Man of Steel‘ ever.  Now, we get him as a serial killer and assassin, with what looks like one hell of a cast minus David Schwimmer.  The trailer looks very intense.  Can’t wait to see it.

Official synopsis: Michael Shannon stars as notorious contract killer Richard Kuklinski in this biopic from director Ariel Vromen (Rx, Danika). To his loving wife Deborah (Winona Ryder) and their growing family, Kuklinski was a caring father. But Kuklinski was a man with a dark secret, and an unusual talent for covering his tracks. For nearly three decades starting in the 1950s, the suburban family man worked as one of the Gambino crime family’s chief executioners, earning the nickname “Iceman” for his use of freezers in obscuring the forensic details about his victim’s deaths. Meanwhile, by constantly varying his methods, Kuklinski made it virtually impossible for investigators to assemble an accurate profile of the killer credited with taking over 100 lives. A protégé of seasoned assassin Robert “Mister Softee” Pronge (Chris Evans), the elusive contract killer struggles to reconcile his relationship with his sociopathic brother Joseph (Stephen Dorff) while nurturing a close friendship with his Gambino contact Roy DeMeo (Ray Liotta). Then, in 1986, an arrest brings Kuklinski’s violent career to a sudden end.