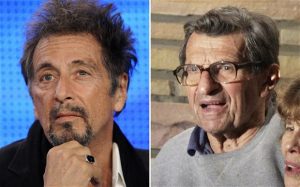 Director Brian De Palma and actor Al Pacino, who famously worked on the 1980’s version of ‘Scarface‘ are teaming up again for ‘Happy Valley‘, a film that will tell the story of Penn State head football coach Joe Paterno.  Paterno’s amazing football club and career came to a screeching halt when it came out that the defensive coordinator Jerry Sandusky had and still was molesting young children, which Paterno and others did nothing to stop it in fear that it would ruin their football club.

Pacino is attached to play Paterno with Dave McKenna writing the script based on the book ‘Paterno‘ by Joe Posnanski, according to Deadline. McKenna wrote the scripts for ‘American History X‘ and ”Blow‘, so you know he has writing chops and will do a great job with the screenplay.  The full storyline is being kept under wraps for now, but we expect soon, a full synopsis, plus a ful cast list.  I’m glad De Palma and Pacino are working again.  They are gold when they work together, which this marks the third time they would be working in the same film.  First there was ‘Dog Day Afternoon‘, then ‘Scarface‘, now ‘Happy Valley‘, which is the working title.

It will be interesting to see what time span this will cover in the events of the allegations and convictions.  I wonder if this will put Pacino back on the Oscar map?  Plus, let’s not forget that Pacino has played a football coach before in Oliver Stone’s ‘Any Given Sunday‘. Your thoughts?