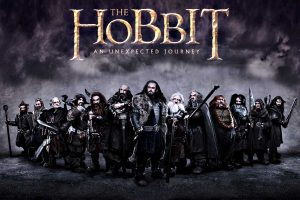 Welcome back to Middle Earth.  Peter Jackson‘s version of J.R.R. Tolkien‘s ‘The Hobbit: An Unexpected Journey‘, which covers the first six chapters of the 19 chapter book, is very faithful to the original material. Jackson has gone back to the world that made him a household name and literally translated verbatim from page to screen, which is sure to blow the minds of fans of the book. However, at its almost 3 hour run-time, ‘The Hobbit‘ feels sluggish and never seems to pick up any sort of pace.  That being said, i have no doubt this movie will make hundreds of millions of dollars before the year is over.

The movie doesn’t really get going until an hour or so into the film, and even then it struggles to engage in any character development or emotion, and the action scenes are too far apart and less than thrilling, compared to the ‘Lord of the Rings‘ trilogy.  I did hear the Peter Jackson plans on releasing an extended cut of this film, and I can’t imagine how much duller this film can be with those scenes in.  Hopefully, there will be a director’s cut that is a condensed version of the film, that way, things can run smoother.

‘The Hobbit: An Unexpected Journey‘ has been plagued with problems for the past several years.  Jackson has wanted to make ‘The Hobbit‘ since the mid-90s, but due to problems dealing with the rights to the books, studio execs, and movie companies going forward with the project then ultimately passing on it, ‘The Hobbit‘ never seemed to see the light of day.  Then there was the news that Guillermo Del Toro was going to take the director’s seat on ‘The Hobbit‘ , but due to creative differences, Guillermo left the production, but still has a co-screenplay credit.  Add to that, the production crew of New Zealand holding out for more money to make ‘The Hobbit‘ thus forcing Jackson to move the project elsewhere, but never did.  Then, Jackson signed back on to return to direct and make a two part film out of the book.  However, due to all of these epic franchise films splitting the final film into two parts in hopes of more money, Jackson and the studio have decided to make three films out of ‘The Hobbit‘. 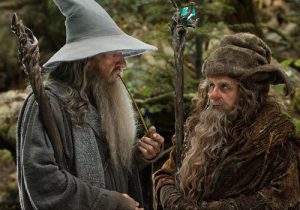 And now, since every major epic motion picture has to have no a different technological advance to make more money, Jackson decided to make the film in 3D as well as 48 frames per second.  The normal is 24 frames per second. This means everything is very crisp and clear and does not have that filmic look, rather it has a live day time soap opera look.  Now my television at home has this option and I’m used to it and enjoy it. I did enjoy watching ‘The Hobbit‘ in 48 fps as well.  I’d imagine some of you won’t.  Now don’t get me wrong, I love movies with a filmic look and would love to see ‘The Hobbit‘ that way as well, but i don’t have a problem with the ultra HD quality of the picture.  Overall, if you are a fan of that ultra crisp and clear ‘made for daytime soap opera’ picture, you will like this image that is presented on the big screen. If you don’t, you won’t.

‘The Hobbit‘ follows the ‘Lord of the Rings‘ cues.  Like ‘Lord of the Rings‘, we get an epic back story complete with a big battle scene, where we see the rich and prosperous dwarves in their kingdom of the Lonely Mountain, and are ultimately forced out by some terrible and ferocious creatures. Tons of dwarves die and the only survivor to the heir of the kingdom is Thorin (Richard Armitage) who swears he will take back his kingdom. 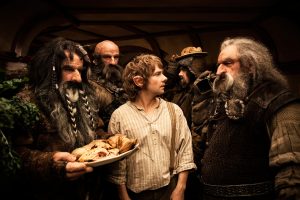 Cut to Hobbiton, just like in ‘Lord of the Rings‘ where we see a much younger Bilbo Baggins (Martin Freeman) meeting Gandalf the Grey (Ian McKellen) who asks Bilbo to go on an adventure, which as we know, Hobbits do not like adventure. Here is where we are introduced to the large fellowship of dwarves who are to go on this “adventure” to reclaim their home.  They are all told to meet at Bilbo’s home where they start their journey, which takes forever to get off the ground due to all of them having to go through their back stories, dinner, cleaning the dishes, and a few musical numbers, which play off as very silly and awkward.

And we are finally off walking through the beautiful landscapes of Middle Earth again, but this time with more backstory from the characters, since there are so many.  At the first attempt at an action sequence, we meet three trolls who have stolen a couple of the group’s ponies for dinner, in what turns into an actual ‘Three Stooges‘ scene as Bilbo tries to stealthily reclaim the ponies and the trolls try to prepare their meal.

Come to find out, in order to gain entrance to this kingdom that is guarded by the dragon Smaug, the group must have two maps and a certain key, which is why they head to the familiar Rivendell, the home of Lord Elrond (Hugo Weaving).  It was good to see Lady Galadriel (Cate Blacnhett) and Saruman (Christopher Lee) reprise their roles again, even if it’s only for a few minutes. After this is where we finally get some pacing for the film. From here on out, the film gains steam and never really lets up.

One of my favorite scenes in the film was where Bilbo finally meets Gollum (Andy Serkis), where the two play a game of riddles for survival, and of course we see something about a ring. Here is where the big action sequence starts with the entire group of dwarves fighting and running from tons of orcs and trolls, which literally leaves them on a cliff hanger, meaning they are all hanging off the edge of a cliff. And much like the first ‘Lord of the Rings‘ film, we see the group look off into the distance and see their destination, The Lonely Mountain. 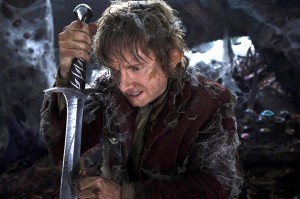 Some of you reading this, might think that I hated this movie.  That is definitely not the case. I actually rather enjoyed the film, but it is definitely not on par with Jackson’s ‘Lord of the Rings‘ trilogy.  None of the characters are particularly interesting yet and none of them are badasses, besides Gandalf.  At every turn, the dwarves are defeated and captured easily. Now, I know that is part of the book, but when it is transferred to film, it doesn’t make for interesting or thrilling action sequences.

Also, in this new series of Middle Earth, Jackson has replaced all of the orcs and goblins with motion capture technology rather than actual humans in costume and makeup.  I did not like this aspect of it and it felt half assed.  It didn’t seem real like the original trilogy did.  And since there are so many dwarves in the fellowship, they all seem to bleed into each other where you can’t tell one from another, besides Armitage’s Thorin.  His performance is very strong as well as Green’s Bilbo and McKellen’s Gandalf.

Howard Shore returned to score the film and that was such a pleasure to hear again.  The score sounds great and hit all of the right notes with the action beats and dramatic moments.  And of course the scale of the film is epic.  It looks great and was wonderful to see the familiar sites again. I can only hope that the next two films will have a better pace and we can finally distinguish between all of the dwarves.  It just seemed there was too much setup and too much of wanting to stick to the explicit details of the book.  And as far as the 3D goes, it wasn’t necessary at all. It didn’t add anything really except for some more depth in the backgrounds. Not my favorite 3D film.

After all said and done, I actually did enjoy this film quite a bit.  However it wasn’t what I had hoped for.  it still has the potential to be great with the next two installments, but don’t expect to see this film winning any sort of awards like the ‘Lord of the Rings‘ trilogy did. I’m just going to chalk this up as the lukewarm appetizer before the main dishes of meat and potatoes.

One thought on “‘The Hobbit: An Unexpected Journey’ Film Review!!!”