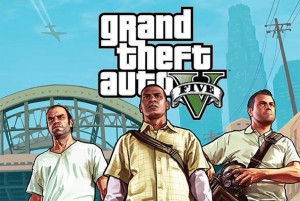 I’m so excited about ‘Grand Theft Auto 5‘.  It looks amazing, and from the trailers and synopsis we have posted over the last few months, we can clearly see how much time, and talent has gone into this.  So, recently, we have only known that the new game from Rockstar would release sometime in Q1 or Q2 of 2013, but thanks to an Amazon update, we know that the game will release March 26th, 2013.  So get your pre-orders in for PS3 and XBOX 360.  We can’t wait.

And like we previous reported, there will be three protagonists that we will get to play as in gameplay.  “GTA V has three protagonists, and you can switch between them “at nearly any time.”  There’s also some unsurprising reveals like how the world of “Los Santos” (GTA V’s Los Angeles) will be bigger than Red Dead Redemption, GTA: San Andreas, and GTA IV combined.”

Pre-order below and enjoy the trailer again.