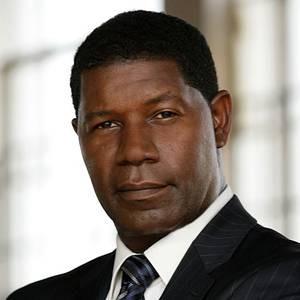 Unfortunately, the late great and wonderful actor Michael Clarke Duncan will not be able to reprise his role as Manute in Robert Rodriguez‘s sequel of ‘Sin City‘ due to his untimely death.  However, actor Dennis Haysbert (President Palmer on ‘24‘) will replace Duncan in that role for the ‘Sin CIty’ sequel.  And if you haven’t seen Haysbert as President Palmer, it might just be the greatest president of the USA ever portrayed on television.

Rodriguez is directing the sequel with comic creator Frank Miller and Mickey Rourke, Jessica Alba, Jamie King, and Rosario Dawson are all expected return.  Jamie Chung will replace Devon Aoki in the sequel.  One of the stories that will be featured in the sequel is ‘A Dame to Kill For‘ and centers on a man named Dwight who is entangled in a very complex and dangerous relationship with a femme fatale named Ava.

Haysbert will play Manute, the sadistic and unstoppable man who is Ava’s husband’s go to guy.  That role was played by Duncan back in 2005.  “Manute is a character that has been part of the heart of the Sin City tales, and the late Michael Clarke Duncan beautifully established that role onscreen,” said Rodriguez and Miller. “We could not tell the story of ‘Sin City: A Dame to Kill For‘ without Manute and are thrilled to welcome Dennis Haysbert to the cast.”

At one point, we heard Angelina Jolie was going to play the part of Ava, and we hope Clive Owen returns to the sequel as well.  Can’t wait.