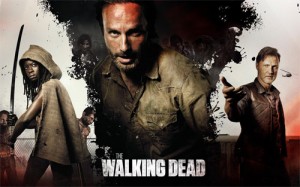 So before write anything I’m going to be honest with the readers….I’ve never read the

comic book version of this. I’m just a viewer going along with no knowledge of what is coming

and how everything ends. Therefore, my synopsis of the series is going to be different than

some. With this information I will now proceed with my recap.

going out on her own. Mearle leads a group of scouts to hunt her down. They find dismembered

walker bodies that spell “Go Back”. As one of the scouts (Garguilo) reacts, Michonne comes

out of the woods and kills two scouts and as she escapes, Mearle shoots her in the leg.

In the prison boiler room, a still out of reality, Rick answers the ringing phone and talks to

a woman about their situation and says “We are dying here”. The woman promises to call back

after talking to her group. Rick cleans up and goes and checks on the group. Glenn and Maggie

plan on making a run for supplies and Daryl sweeps the lower levels.

Back in Woodbury, Andrea and the Governor talk about the gladiator style fights and

while she didnt like them she understands escapism. She chooses to stay and ask to help out

in he town by working the wall and shooting walkers. While up there with another townsperson

they spot a walker. After the girl has a few failed attempts with a bow, Andrea decides to jump

down and stab the walker with a knife. This action puts Andrea in front of the governor for

points out that maybe the Governor and Woodbury is growing on her. 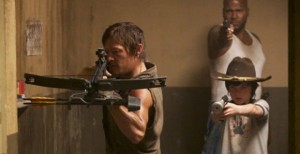 Back in the boiler room, Rick gets another phone call from a man asking him if he has

ever killed anyone. He responds to only those who have threaten him and his group. When he

was asked about his wife he dodged the question and the man hung up on him. Hershal then

joins Rick in the boiler and he assures him the Lori was sorry for the past. Rick tells him about

the phone calls and asks him to keep them a secret.

In the woods, Merle and Garguilo continue to hunt for Michonne. She ambushes them

again and injures Garguilo. All three get attacked by walkers and Michonne cuts on in the belly

and gets guts spilled on her. She escapes and leaves Merle and Garguilo to fight them off. After

the fight Merle calls off the hunt for Michonne figuring she is as good as dead. When Garguilo

fights him, Merle shoots him in the head.

Back in the prison, Daryl, Oscar and Carl sweep the lower levels. Daryl opens up about

the death of his mom and Carl states that he was the one that shot his mom. Back to the phone,

Rick talks to a woman who says his name and asks about Lori and wants him to talk about it.

When he asks how she knows his name, the line goes dead. 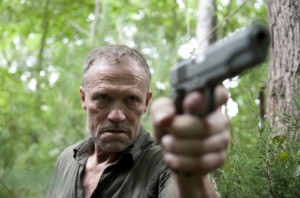 Michonne hobbles to a shopping center where she see’s Glen and Maggie. She hides

while she watches them get supplies. Merle comes across them and ask about his brother and

where they are hiding. When Glen refuses to give the location, he makes Maggie a hostage and

kidnaps both of them by gunpoint and takes them and their vehicle to Woodbury.

backyard and have a drink and kiss. They then proceed to have sex. They are interrupted by

look to be doing well and he plans to find out where their location is. The governor goes back to

In the lower levels of the prison, Daryl finds Carol’s knife in a walker.He thens moves the

walker to kill something making movement behind a door. He opens the door and finds Carol

dehydrated and dazed. Daryl picks her up and carries her out.

In the boiler room the phone rings for Rick and he finds out he had been talking to Amy,

Jim, and Jacqui and is now talking to Lori. He sobs and tells her that he loves her and she

reminds him to take care of Carl and the baby. Then phone goes dead and he then goes back

to the base and takes the baby from Hershel and cradles her. He then carries the baby to the

prison yard and in the distance he sees a group of walkers and walking with them is Michonne.

She is carrying the baby supplies.

I am really enjoying the development and even more complexity of these characters. I

by Season 3 but surprisingly it’s not and I’m really pleased about it. This episode was terrific

because it is obviously laying the groundwork for an upcoming battle and a terrific cliffhanger.

Hopefully, there won’t be huge body count and most of the characters will make it to Season 4.