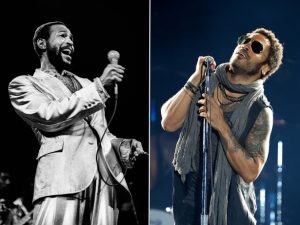 Lenny Kravitz is going back to his first love, music, by being set to play Marvin Gaye in a film directed by Julien Temple.  This will be the first film for Kravitz which he will take the lead role.  And Temple is no stranger to films dealing with musicians as he has a long resume of music centric films based on bands and of course the hit 80’s film ‘Earth Girls Are Easy’.

This Marvin Gaye project will begin shooting next year and cover his life during the early 80s when Marvin was in Europe as he tried to get a hold on his many addictions, which led to his untimely death in 1984 where he was shot by his father. This movie should not have any music copyright issues unlike others in the past. I look forward to Kravitz sultry voice really shining on this.

It seems like Kravitz is enjoying the film business as he was in the recent ‘Precious’ film and the epic hit ‘Hunger Games’.  I think he might be perfect for this role.
Your thoughts?