‘Flight of the Navigator’ Remake Is Happening!!! 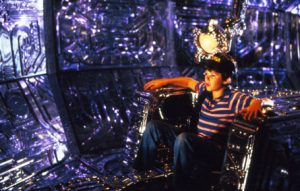 I can’t believe I am writing this.  But, Disney is remaking their amazing 80’s time travel/alien film ‘Flight of the Navigator’.  The creative team behind the movie ‘Safety Not Guaranteed’ Colin Trevorrow and Derek Connolly will be developing the remake with Trevorrow to direct. The original 1986 film was directed by Randal Kleiser and starred a young Joey Cramer and co-starred Veronica Cartwright and Sarah Jessica Parker, with Paul Reubens as the voice of the robotic alien.

All is being kept under wraps as of now for the remake, but I do knowthat Brad Copeland was hired to write the first draft of the remake a few years ago according to Variety. “‘Flight of the Navigator’ wasn’t a seminal movie of my childhood but I remember liking it and the original meant a lot to Colin as a kid, so it’s really his baby. It’ll be good to have some balance so it’s not two fanboys writing the movie,” Connolly said.

Not sure how I quite feel about a remake of this, but who knows?  What your thoughts?