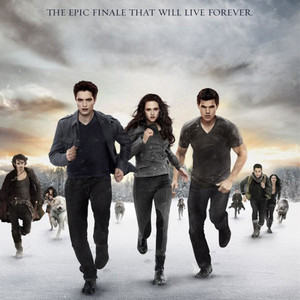 This is the end – finally. After four books and five movies, Stephenie Meyer’s ode to the true love between an insipidly needy girl and an overbearing vampire is complete with the opening of Breaking Dawn, Part 2 (BD2). If you are a ‘tween or extremely bored and emotionally stunted older woman that loves this series, then you might want to stop reading this review.

The movie begins as newly transformed Bella wakes up as a vampire. She is suddenly “beautiful” – we know this because now she’s wearing more dresses and shorter hemlines – and somehow she is not nearly as pale as she was when human. She can see EVERYTHING, and her eyes rove about until they focus in on Edward, and now their immortal love can begin.

Bella, with Edward’s help, explores her new abilities and goes hunting for food. She takes down a mountain lion and comes out of the fray without any indication that she just tussled with a 200 pound cat except a convenient tear in her skirt like she’s had that side slit all along. She finally gets to meet her creepy, CGI-enhanced daughter, Renesmee, and though the child has a beating heart and blood, Bella demonstrates amazing restraint by not sucking it dry. The new family, Jacob (who is destined to marry the child, but this isn’t supposed to be gross at all), and the rest of the Cullens enjoy about three minutes of peace before their existence is threatened.

After a vampire with a bit of a vendetta against the Cullens sees Renesmee and believes her to be some kind of illegal child vampire creation, The Volturi have the excuse they need to descend upon the Cullens, destroy them, and take Alice (the Cullen with visions of the future) because the leader, Aro, thinks she’d make a powerful addition to his coven.  The Cullens must trek across the globe to find friendly vampires to witness for them. Many fear going against the Volturi at first, but they band together at the wonder of this half human/half vampire child, who has now grown to be about seven-years-old, because that’s how it works, a.k.a. it’s convenient for the story.

Vampire witnesses the world-over and the werewolf friends of the Cullens meet on a snowy field in the Pacific Northwest for a final showdown with the Volturi. They seek to prove to Aro that Renesmee is indeed mortal(ish), but still looking to claim Alice, Aro argues the child could be a danger in the future. How could she be hidden in the human world? Could she destroy vampires? The bureaucratic discussion of vampire rules and fear-mongering speech seem out of sync with a monster film, but we’re saved from the vampire UN when the movie takes a twist that the book did not.

In the book, the vampires merely plead for understanding, and in the end only one vampire dies. The movie actually has a monster throw down in the form of a vision that Alice shows Aro to inform him that his Volturi will actually lose. This vision, not the discussion, convinces Aro to leave the Cullens and their friends be. The Volturi depart, the friends go back to their homes, no one dies – except a vampire that we don’t care too much about – and Bella and Edward are now actually free to love each forever and ever OMG! 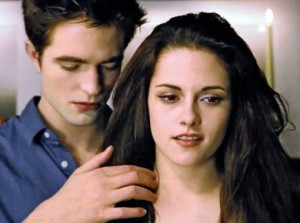 This is pretty schmaltzy stuff. Kristen Stewart attempts to emote as she ever has, with angsty looks and eyerolling. Robert Pattinson broods all over the place. We see actors who are better than this join the ranks. Lee Pace was more frightening as the 50’s styled necromancer in Pushing Daisies. Michael Sheen actually seems to enjoy his role as Aro because he takes every chance to ham it up. He creepily giggles and would have been able to sell this as serious if this were a silent vampire pic.

The effects are also pretty cheesy. During the battle, we see some matinee B movie, though bloodless, deaths – heads torn in half, limbs that rip off in awkward ways, delayed reactions. When the Cullens go around the world seeking their friends, we know they are traveling through stock images of other countries, and then they are suddenly on an obvious movie set. It was reminiscent of the constant replay of the shot of Hagia Sofia in From Russia with Love. All of this might be forgivable if it were some homage to kitsch movies, but it’s not. This was a serious effort with serious money behind it.

The movie closes with a montage of the many kisses and stares and longing hugs of Edward and Bella. They are pushing you to FEEL THIS LOVE. The last thing on screen is the final word of the book – “Forever.” In the past decade, we have seen wonderful conclusions to serial movies like Lord of the Rings and Harry Potter. At the end of these movies, the audience is emotionally drained. They’ve lived every moment with well-developed, beloved characters in epic stories that have the fate of the world in the balance. At the end of Twilight, we get a weak version of Romeo and Juliet. Two idiots that nearly got their friends killed over their tritely intense love.

I really hope that we can now exorcise the Twilight series from our current culture and move on. To those who love the books, I apologize. Perhaps I’m being brutal, but there are better stories out there, better movies, better actors and better ends to pursue.