Check Out the Trailer for ‘Mortal Instruments: City Of Bones’!!! 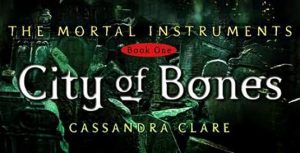 Here is a trailer for ‘Mortal Instruments: City Of Bones’, based on one of Cassandra Clare’s novels.  The novel is a horror fantasy and is slated to open in August of next year.  Cast includes Lily Collins, Jamie Campbell Bower, Jonathan Rhys Meyers, Lena Headey, Kevin Zegers, Jared Harris and Godfrey Gao.  Harald Zwart will sit in the director’s chair with I. Marlene King and Jessica Postigo writing the script.

Official Synopsis:  CLARY FRAY (Lily Collins) is an ordinary Brooklyn teenager until the night she meets the mysteriously tattooed JACE, who turns out to be a half-angel warrior known as a Shadowhunter. When Clary finds out her mother JOCELYN has been abducted, she desperately hopes Jace will be able to help. After a whirling golden portal transports her across time and space in a heartbeat, Clary realizes she too has the powers of the Shadowhunters. But can she harness them in time to save her mother?

Clary, Jace and their fellow Shadowhunters endure one breathtaking battle after another against vampire, warlocks and demons—only to discover Jocelyn hid a terrible secret from the fiercest warrior of all: VALENTINE. Cast out from the world of Shadowhunters, Valentine abducted Jocelyn believing she had a powerful tool known as the Mortal Cup. Using her newfound gifts, Clary finds the Cup, only to be brutally betrayed and forced to relinquish it.

Still reeling from this setback and racing to save Jocelyn before it’s too late, Clary finds herself caught in a battle between forces she barely understands. Based on the best-selling series by Cassandra Clare, THE MORTAL INSTRUMENTS: CITY OF BONES is a magnificent urban fantasy rich in detail and suspense, about a girl’s journey to the darkest corners of the underworld to save those she loves.