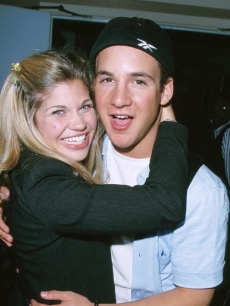 Huge news.  Maybe because most of us grew up with this show.  As we previously reported on Disney prepping a sequel series to’Boy Meets World’, Ben Savage and Danielle Fishel have officially signed on to reprise their roles as Cory Matthews and Topanga Lawrence in the sequel series ‘Girl Meets World’.  I’m so glad Savage and Fishel signed on, it just wouldn’t have been the same without them.

The sequel series picks up more than a decade after ‘Boy Meets World’ ended its ABC run and finds Cory and Topanga happily married and raising their 13-year-old daughter, Riley (from whose point of view the story is told). The pilot is still in the very early stages of development with ‘Boy Meets World’ creator and executive producer Michael Jacobs at the helm.

I personally use to watch this feel good series so I’m ready to see the story line that Disney comes up with. A lot of potential with over 10 years passing since the original show was on. Good luck Disney!!