The Red Band Trailer for ‘Movie 43’ Might be the Best Thing You See All Year!!! 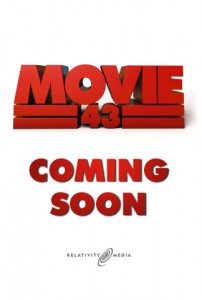 I first heard about this film earlier this year when Gerard Butler told me that he was going to play a foul-mouthed leprechaun, and that one of his lines was, “I’m going to crawl up your mother’s cunt and start a fire.”  That instantly put this film at the top of my list.  This film has about a dozen writers and a dozen directors, and looks to be a sort sketch comedy film, but who knows? I can’t tell what this will be about.  But one thing is for sure, it looks fucking hilarious and has an AMAZING cast including, Sean William Scott, Halle Berry, Naomi Watts, Christopher Mintz Plasse (McLovin), Chloe Moretz, Liev Shreiber, Terrence Howard, Gerard Butler, Kate Winslet, Elizabeth Banks, Hugh Jackman, Kristen Bell, Emma Stone, Anna Faris, Richard Gere, Parick Warburton, Justin Long, Uma Thurman, Kate Bosworth, Kieran Culkin, Jack McBrayer, and much much more.

Below is the red band railer for the film which means it is very NSFW.  Enjoy the trailer.  Can’t wait for this.