The ‘Holy Motors’ Trailer Makes This Film One of the Most Anticipated Movies I’d Like To See!!! 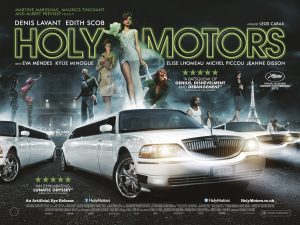 I’ve been hearing about a little film called ‘Holy Motors’ for a little while now, and after finally getting in late to the game, I watched the trailer.  And friends, this looks amazing and bizarre, and unlike anything I have ever seen.  There is a lot going on in this trailer that I don’t even know where to explain, so I ‘ll just let you view and come to your own conclusions.  But whatever it maybe, you can’t deny that this looks insane and very, very good.  I can’t wait for this to open up in Dallas.  It’s open in a couple of cities already.

Synopsis: “From dawn to dusk, a few hours in the life of Monsieur Oscar, a shadowy character who journeys from one life to the next. He is, in turn, captain of industry, assassin, beggar, monster, family man… He seems to be playing roles, plunging headlong into each part – but where are the cameras? Monsieur Oscar is alone, accompanied only by Céline, the slender blonde woman behind the wheel of the vast engine that transports him through and around Paris. He’s like a conscientious assassin moving from hit to hit. In pursuit of the beautiful gesture, the mysterious driving force, the women and the ghosts of past lives. But where is his true home, his family, his rest?”