That CW Green Arrow Project Has Just Been Greenlit For A Full Series!!! 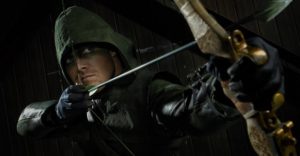 The CW has given a full season order to ‘Arrow’, the drama/action adventure series based on the comic book ‘Green Arrow’.  The series drew over 4 million viewers with its premiere, which made it the network’s most watched telecast in three years.  Hooray for comic-book tv shows.

“Our strategy of rolling out our new fall schedule later in the year really paid off for The CW on several levels, especially with Arrow“, said CW president Mark Pedowitz.  Congrats to everyone involved.  No word yet on the network’s ‘Beauty and The Beast’ show of whether it will be made in to a full season or not.

Now we just need an ‘Evil Ernie’ series and all will be right with the world.