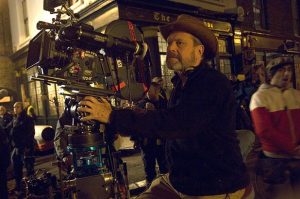 Terry Gilliam is knee deep in his new project called ‘Zero Theroem’, a film that centers on a computer genius who is working on a mysterious project that can potentially discover the meaning of life.  That computer genius is name Qohen Leth, which will be played by Christoph Waltz (Inglorious Basterds).

A little while ago, Gilliam posted this on his Facebook account, “Announcement! I’m heading of to Bucharest to start work on my new film, The Zero Theorem. It stars everybody’s favorite Nazi, the great Christoph Waltz. Very original script about a man waiting for a telephone call that will give meaning to his life. Some other things happen as well. It’s profound and funny in more or less equal measures. We’re going to have fun. I’ll keep you posted as the cast expands.”

Waltz is busy these days, with this film and Tarantino’s upcoming ‘Django Unchained’.  Production of the film has started in Romania according to Deadline and will film at Medipro Studios soon.  Also, Gilliam has cast David Thewlis (Harry Potter) and Tilda Swinton (Burn After Reading), Lucas Hedges (Moonrise Kingdom), and Melanie Thierry (Babylon A.D.).
Synopsis: “Scripted by Pat Rushin, The Zero Theorem is set in a world that seems right in Gilliam’s wheelhouse. Living in an Orwellian corporate world where “mancams” serve as the eyes of a shadowy figure known only as Management, Leth (Waltz) works on a solution to the strange theorem while living as a virtual cloistered monk in his home—the shattered interior of a fire-damaged chapel. His isolation and work are interrupted now and then by surprise visits from Bainsley, a flamboyantly lusty love interest who tempts him with “tantric biotelemetric interfacing” (virtual sex) and Bob. Latter is the rebellious whiz-kid teenage son of Management who, with a combination of insult-comedy and an evolving true friendship, spurs on Qohen’s efforts at solving the theorem. But these visits turn out to be intentional diversions orchestrated by Management to keep control of Qohen’s progress. Bob creates a virtual reality “inner-space” suit that will carry Qohen on an inward voyage, a close encounter with the hidden dimensions and truth of his own soul, wherein lie the answers both he and Management are seeking. The suit and supporting computer technology will perform an inventory of Qohen’s soul, either proving or disproving the Zero Theorem.”

I can’t wait for this.  I love Gilliam films.  Your thoughts?