Sylvester Stallone and Robert De Niro Will Step Into The Boxing Ring Once Again!!! 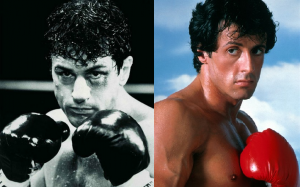 Robert De Niro and Sylvester Stallone will fight each other in ‘Grudge Match’ for Warner Bros.  Kevin Hart will play the fight promoter who retrieves these two old and retired boxers to step in the ring one last time.  Peter Segal will direct with ‘Entourage’ creator Doug Ellin working on a the latest draft of the script.  So Balboa vs. La Motta, huh?  Not sure whether to laugh or be excited about this.  I just hope the tagline is, “No matter who wins, we all lose.”

I’m sure this is going to be a comedy-centric film, since Segal is known for directing comedies such as ‘Tommy Boy’, Nutty Professor 2, ‘Anger Management’, ’50 First Dates’, and ‘The Longest Yard’.  I was kind of hoping this would be more of a drama, but it will most likely be a silly type of film, which is unfortunate.  I’m sure at some point we will se more comedy actors added to the cast.  Plus, will we see De Niro have a six pack again?