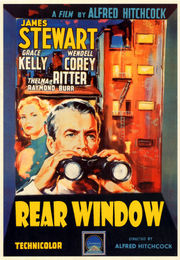 You read that right, folks.  ‘Rear Window‘ , the Hitchcock classic will become a stage version on Broadway.  Director Jay Russell and producer Charlie Lyons have teamed up with actor Tim Guinee (Homeland) to develop the project. Lyons and Russell have worked together before on ‘The Water Horse‘ and ‘Ladder 49‘.

According to Deadline, the rights to ‘Rear Window‘  have been sought after for many years, and this is the first time the project has ever been given the go ahead. “This is a tremendously exciting project,” said Lyons. “We are assembling a world-class team of artists to bring this timeless thriller to the stage.” Russell adds, “Woolrich’s story is deliciously dark and edgy and our plan is to make it brand new all over again.”

I’m not sure when production will start or when this will start its run, but I expect this one to be big.  Now, if this becomes a success, will this be a pre-cursor to more Hitchock film to be adapted for the stage?  Can you imagine a Broadway version of Psycho, The Birds, or North by Northwest?  How killer would that be?