Arnold Schwarzenegger Will Return to the ‘Conan’ Films!!! 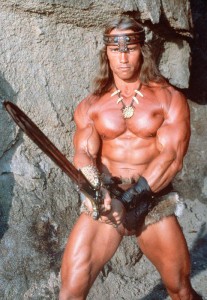 Why is this happening?  I don’t get it.  Universal Pictures has just inked a deal for ‘The Legend of Conan’, an action film that is set to star Arnold Schwarzenegger in a role he made famous a few decades ago.  Universal released the first film of the series back in 1982 and really boosted Schwarzenegger’s film career.

Fredrik Malmberg and Chris Morgan will be producing with Morgan producing the last several ‘Fast and Furious’ films.  I can already tell this is not going to be top notch.  “The original ended with Arnold on the throne as a seasoned warrior, and this is the take of the film we will make,” Malmberg said. “It’s that Nordic Viking mythic guy who has played the role of king, warrior, soldier and mercenary, and who has bedded more women than anyone, nearing the last cycle of his life. He knows he’ll be going to Valhalla, and wants to go out with a good battle.”  Morgan went on to say that currently there are no plans for Jason Momoa to return.  Momoa played Conan in the most recent reboot of the film and is also known to be in a little HBO show called ‘Game of Thrones’.

“After the original seminal movie, all that came after looked silly to me,” Morgan said. “Robert E. Howard’s mythology and some great philosophy from Nietzsche to Atilla the Hun was layered in the original film. People say, he didn’t speak for the first 20 minutes of the film, but that was calculated in depicting this man who takes control of life with his own hand. This movie picks up Conan where Arnold is now in his life, and we will be able to use the fact that he has aged in this story. I love the property of Conan so much that I wouldn’t touch it unless we came up with something worthy. We think this is a worthy successor to the original film. Think of this as Conan’s ‘Unforgiven’.”

No word yet on a rating.  Hopefully it’s R, but who knows.  However the producers said they won’t back down from the brutality or the grit from the time period according to Deadline. 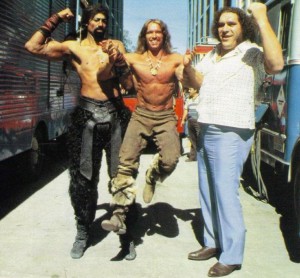 “I loved the choices they made in that film,” Morgan said. “You start with the wholesale slaughter and death of Conan’s village at the hand of the warlord played by James Earl Jones, and you see young Conan chained to a wheel as he becomes stronger. Then he’s a pit fighter, and later basically a stud bull before he meets the first kind person of his life, who lets him go. All of that horrific stuff happened for a reason, and then an act of kindness sends him on his journey. Will that level of violence be there? Absolutely, but only if it serves a character who lives by that barbarian law of the wild, who is capable of extreme violence and rage, but who has created his own code and operates from within it. By the end of that film, Conan became a certain character, and this film picks him up there, as he faces different challenges that include dealing with age.”

Schwarzenegger said, “I always loved the Conan character and I’m honored to be asked to step into the role once again. I can’t wait to work with Universal and the great team of Fredrik Malmberg and Chris Morgan to develop the next step of this truly epic story.”

Now, why can’t we just leave well enough alone.  Haven’t we said all we can with the film adaptations of Conan?  And must we get back a now 65 year old man to play an almost naked barbarian for two hours.  Let’s think things through a little.  I’m all for Schwarzenegger going back to ‘Terminator‘  and doing the ‘Twins‘ movie, but this, I think they should just leave it alone, unless Schwarzenegger passes the torch to The Rock or something.