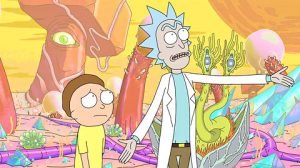 Dan Harmon (creator of ‘Community’) has a new series in development for Cartoon Network’s Adult Swim lineup. The series is called ‘Rick and Morty’ and will be a half hour animated comedy.  Harmon and Justin Roiland created the story and will premiere in 2014.

According to Deadline, the series centers around a genius inventor grandfather and his less–than-genius grandson, and the journeys in life they share.  i imagine this will be a huge hit.  Currently, Harmon has two other live action projects being developed over at CBS and Fox.  I haven’t seen all of ‘Community’, but the few episodes I have seen, have been great.

I hope this turns out well.